Primary Schools at Risk.
One of our best primary schools in is the 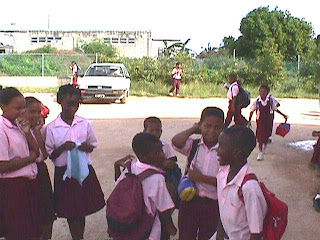 Stoney Ground Primary. It is situated at the Stoney Ground end of the . It stands behind the pretty pink wall on the right in the photograph below. It is staffed by dedicated teachers. Some of the brightest and best taught high school students come from that primary school. Its dedicated teachers succeed in spite of the environment they work in.

Leaning on the eastern wall of the school is a “restaurant”. Its principal sale items appear to be rum and beer. At all hours of the day there are crowds of young men standing around outside drinking alcohol. They are drinking and talking and intermingling with the schoolchildren as they go to and from the school. Their drunken loutish shouting can be clearly heard in the schoolyard. What in God’s name prevailed on the police to permit a liquor licence to an establishment that is practically leaning on the wall of a primary school? Is no one in the Education Department or in the Royal Anguilla Police Force conscious of how inappropriate this is? The purpose of the annual is to give the police and members of the public an opportunity to object to the grant of a licence to an inappropriate establishment. Is none of them bold enough to make a protest at the annual liquor licence court? The location of this establishment clearly makes it inappropriate for it to hold a liquor licence. No properly advised magistrate would renew the licence if the circumstances were pointed out to her. Perhaps one or two of the parents should be turning up to make a protest when the licence comes up next for renewal. Just my suggestion. Or, is every parent too afraid of retaliation?

outside the school wall is not the only negative influence in the environment that the teachers at the have to contend with. As if that were not bad enough, on the opposite side of the Avenue from the “restaurant” is one of the most notorious drug dealing establishments in . There is a steady stream of customers all day long. Some of them pretend to be attending the “restaurant”. The dealer runs out from his house and crosses the road to sell his drugs on the steps of the restaurant. The dealing is done in open sight of all passers by. The customer buys a beer and drives off. Children walk to and from school past this activity, day after day. It goes on right in front of their eyes. No one does anything about it. It is almost as if the activity is invisible to adult eyes. Is it that only the children know about it?

The restaurant is said to be

owned by a retired Anguillian police officer. I am quite sure that had nothing to do with the reluctance of the police to object to the granting of the liquor licence. Men of principle and integrity would never have allowed such a matter to influence them in doing their duty. They must have a very good reason why, after all these years of broad daylight drugs dealing and sale of alcohol outside the school wall, they have failed to arrest a single person or take a single step to provide a safe environment for our primary school children. I just do not know what it is. Do you?

I took the photograph below on a quiet Sunday. I do not recommend you try to do the same on a workday in broad daylight. Innocent tourists photographing the pretty primary school have been known to get chased by cars filled with tough young men carrying guns.