NBA and ANTIL. Why do all 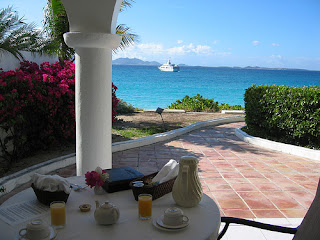 sensible, thinking Anguillians must feel an increasing tide of concern sweep over us when we contemplate the continued pressure being brought by ANTIL on government to reject Gencom’s application to purchase Cap Juluca Hotel? Is it that we are unpatriotic? Is it that we prefer the foreign developer over local investors? Is it that we lack confidence in the ability of indigenous Anguillians to own and run a premier hotel in ? Or, is it that we are concerned that when the law suits start to fly about, then our interests are likely to be damaged?

One reason for our apprehension is the involvement of National Bank of Anguilla. NBA is the premier bank on . It holds nearly one half of all the banking business in . NBA is the principal financial sponsor of ANTIL. ANTIL's recent press releases indicate that NBA has invested over US$100,000.00 in ANTIL. NBA’s CEO is Val Banks. Val is the brother of the Hon Minister of Finance, his long-time political adviser, and, one can reasonably assume, has the ear of the minister, and exercises influence over the minister. One of NBA's directors is Marcel Fahie. Marcel is one of the most influential of NBA’s directors. He writes the policy papers for NBA’s Board of Directors. What he proposes, NBA disposes. At the same time, he is government's principle economic adviser, and as such advises government on whether ANTIL's proposal is to be preferred over Gencom's. NBA has not just lent money to ANTIL, as it could to any borrowing customer. NBA is by far the single largest investor in ANTIL. NBA has put its CEO and influential members of its Board of Directors at the forefront of ANTIL. ANTIL is, by all appearances, an extension of NBA. If ANTIL does anything that is alleged to be wrong, then NBA can expect to be joined in the resulting law suit.

NBA has ventured into the risky business of hotel development before. It has previously lent money to Mariners Hotel and to Cinnamon Reef Hotel. It got burned when those ventures went bankrupt. It was left holding bad loans. We had hoped that NBA would be more careful about letting patriotic motives drag the institution into more speculation in the tourist industry. If ANTIL does not succeed in acquiring Cap Juluca, the likelihood is that NBA will not be able to recover its investment in ANTIL. Additionally, it will almost certainly be involved in expensive litigation for having induced a breach of contract between Gencom and the owners of Cap Juluca. Given the type of people that ANTIL is up against at Cap Juluca, I put the odds of ANTIL succeeding no higher than one in ten. It has no more than a ten percent chance of ending up as the owner of Cap Juluca. That makes NBA’s chances of recovering its investment at one in ten.

Those are not the sort of odds that I would have thought that bankers invested in. NBA is my bank. I hold shares in it. I bank at NBA. I do not bank at any other bank. I do not want to see NBA joined as a party to the law suits that are about to begin. Val and Marcel are friends of mine. I have every respect for them and who they are. I am concerned. I am very concerned.