the Protection and Restoration of Key Habitats, Species and Landscape Features through Legislation and Appropriate Management Structures and Mechanisms, Including a Protected Areas Policy, and Attempt the Control and Eradication of Invasive Species. This was the second commitment made by the government of , like other OT governments which in the year 2001 signed up to an Environmental Charter [link here] . Dr Mike Pienkowski is the Chairman of the UK Overseas Territories Conservation Forum. He was engaged as a consultant to examine how we were performing under our Charter. He prepared a Report of August 2007. His Report measures performance by the year 2007 of UKOTs and the UK Government in implementing the 2001 Environment Charters. A copy of his 19-page Report can be read [link here].

According to the Report, we have not done very well in meeting this second commitment. The report records that “lacks legislation to designate terrestrial protected areas, but such legislation has been drafted and awaits being put before the Legislative Assembly”. So, though we have six designated protected areas, they are not protected by law. That makes us the lone BOT, other than , with 0 acres of nature protected areas. Unlike most of the other territories, we have 0 key species with conservation action plans developed, completed, or being implemented. We have, unlike most of the other territories, done nothing to update our legislation to fill gaps in nature protection. We have not completed a review of invasive species problems. We appear to have no action plan to deal with invasive species.

I remember after Hurricane Louis. The green iguana, 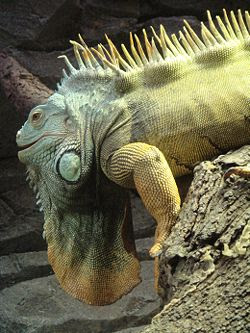 Iguana iguana [link here], arrived on our beaches floating on logs that came from Guadeloupe and Dominica where they had been uprooted by the storm and washed out to sea. Illegal immigrants! We were warned at the time that they posed a threat to our indigenous iguana, Iguana delicatissima [link here]. No one seems to be paying attention. Today, you can buy a locally bred illegal immigrant in any pet shop on the island. They are now considered almost local!

When I asked the Anguilla National Trust if they had any comment, they replied, “While HMG and UKOTCF would like to see Anguilla implement more of the Charter, the truth is that Anguilla is in fact spending more resources implementing the Declaration (SGD) and the National Environmental Management Strategy (NEMS) which all OECS countries signed back in 2001. The Principles of the SGD are far more relevant to our needs at this time and there is greater support coming from the OECS-ESDU. In fact, has received several commendations from OECS with respects to the SGD & NEMS. Only (home of OECS Secretariat) is more advanced than us in the SGD’s implementation. What this report has not pointed out is that while appears to have performed poorly, HMG has been reducing funding via its Overseas Territories Environment Programme (a funding facility) and that the same UKOTCF competes with UKOTs for funds from this facility to implement projects in UKOTs.”

Now, I know that the ANT is a statutory corporation and not a branch of government. But, the ANT is, in the Department of the Environment, the executive arm of government that implements the policies and programmes of government. Government is its largest funding source. The ANT speaks for government in the area of the environment. So, I suppose that reaction was only to be expected.

I do hope that when we make commitments we will put aside the funding to meet them.

Is that not what we are all supposed to do in our daily personal lives?