One of my first posts contained the short question: "Altamer. Is there Russian money involved?”

A few days after it appeared, I got an email. It was from one of the managers at Altamer. It read, “I looked at your blog site today. There is a reference to Altamer and Russian money. This kind of unfounded gossip is damaging and unfair, can you remove it please? -- ”

I did not think too much of it. The Eggletons are the reputed owners of Altamer. I do not know t

he Eggletons. I never met either of them as far as I know. I had no hard facts. I had heard two things. The first was that Altamer had a lot of very rich Russian guests. The second was gossip that Mike Eggleton had been heard to say how easy it was to make money in . So, I did not bother with the email.

Then, last week a correspondent sent me a link. It was to a Times Online article. It explained that Mike Eggleton had been the Merrill Lynch Moscow manager up until August 2006. He was by profession an investment adviser. He had left Merrill Lynch and gone to join Trust Investment Bank. This is a Russian investment bank. It advises Russians with a lot of money on how to make it safe and grow at the same time. That is what investment advisers do for a living. It is a perfectly legitimate way to earn money in Russia. Some of them also notoriously advise people with suspect money how to make it clean. We all read the press about Russia. There is a lot of money in Russia that needs somewhere to be washed. I am not suggesting there is the slightest evidence that Eggleton does this for a living. It is just that this must be a concern for those of us who have to make our homes here.

My interest was rekindled. So, I did a Google searc 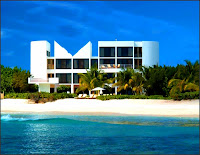 h. I found an interesting item on the Altamer website about their Russian villa.

I also found the Trust Investment Bank website. It explains in detail Mike Eggleton’s background, and in particular his long and no doubt lucrative connections with . He has apparently been working there as an investment adviser since 1995. Trust Investment Bank is so proud of its acquisition of Mr Eggleton that it has another article about him on its website.

Oddly, I have not been able to find a single phot

ograph of Mr Eggleton. His wife’s photograph, on the other hand, is all over the Internet. She is very easy to look at.

has come a long way. Even Russian money would appear to find lucrative investment opportunities in our little rock of an island. I wonder what the advantage is for them? And, are we not entitled to ask how an unprepossessing young man from the USA came to be so rich after a few years in Russia? And, if it is not his money that is being used to develop Altamer, will we be embarrassed in a year or two when the true source of the funds comes out?