Goat’s Foot. Beach morning glory is called “goat's foot” in , and erroneously sea bean, which is a different species often found growing on or near the same beaches. In the , where it's commonly found on the , it's called railroad vine.

In 1999 the Anguilla National Trust commissioned a report on the ecology of . 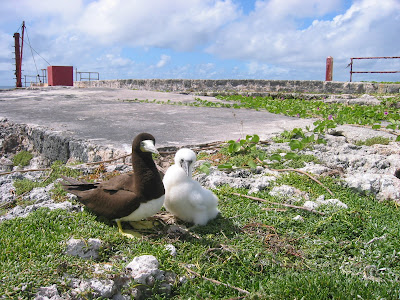 The following is from the resulting 1999 report by Dr. Michael A Ivie, a conservation biologist who is a Professor at :

"Ipomoea pes-caprae. The Beach Morning Glory is a very common beach plant, familiar to every naturalist with expertise in the West Indian region. It was not present when Ogden et al did their inventory in 1985, but was established by the time ICF Kaiser made their visit in 1998. In their report (ICF Kaiser 1999) it is misidentified as Sea Bean, Canavalia rosea, a member of the Fabaceae. The lighthouse keepers say the plant was introduced with sand from used in the reconstruction after Hurricane Luis. This plant is a very large vine, highly invasive, and an aggressive competitor. It is currently beginning to spread out of the immediate housing area, and is a threat to the native species of plants to the north of the bunkhouse, and the large populations of natives in the southern pit we called the of . No native invertebrates were observed utilizing this species".

Karim Hodge, then of the National Trust, agreed to see to its removal, which at the time might have required five minutes with a shovel or hand trowel. Dr. Ivie says he offered to remove it at the time, but was told it would make a great field trip for the National Trust and they would take care of it right away. By the year 2007, the goat’s foot has taken over the . It now threatens to strangle the remaining native species that provide food for the lizards and insects living on the island. 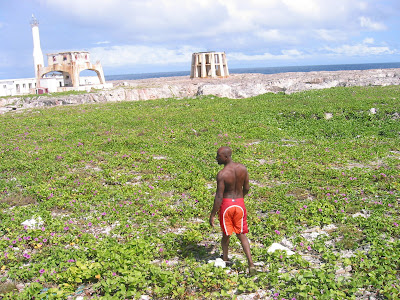 Nothing that I know of eats or uses any part of the goat’s foot plant. If left alone it will completely take over and strangle to death all forms of life on the island.

Dr Ivie has a website with some more revealing photographs. He writes,

I tried to send a power point file with 8 photos on 3 slides of the plant situation in 1999, but file was too large and got kicked back. Therefore, I loaded it on my server at [link here]

The left hand photo in the first slide is the total extent of the beach morning glory in 1999. The light house is to the right in this view, the "dock" to the left. The second page has views of the native plants in the pit to the south. The third slide shows the area infested in the 2007 photo without BMG. Note that the low angle of the top photo obscures the many native plants actually on the rocks, visible at the feet of the folks in the lower photo. These plants were the ones eaten by the Ameiva, and by several of the native insects that were also eaten by lizards. This might give some idea of how much has changed.
Michael A. Ivie, Ph.D., F.R.E.S.

How many government officials have visited in the ensuing eight years?

And, now we read of an initiative by the British House of Commons. Yesterday, 28 November, Joan Ruddock (Parliamentary Under-Secretary, Department for Environment, Food and Rural Affairs) stated in the House of Commons:

Why are they spending money sending people to invasive species workshops if we then fail to do the actual work?

If we can be this nonchalantly negligent over what might seem to be simple issues, can you imagine how careless we are over the important issues?