"The Select Committee on Foreign Affairs has embarked, to some extent at my prompting, on a review of our overseas territories. I think that the House has abdicated its responsibilities to the few thousand people peppered around the globe in the very small, residual, territories. People say, "Well, they have their own legislative councils." Indeed they do, but their Parliament is this Parliament. If our country goes to war, the people of Bermuda, Gibraltar, the Turks and Caicos Islands and the do not sit it out; they are committed by the actions taken by our Government and Parliament.

There is great disparity in the wealth of our overseas territories. Some are demonstrably wealthy and self-sufficient, although the distribution of that wealth leaves an awful lot to be desired in some places; there are great disparities within those territories. Other territories are dependent on funding from , and their people are in what you and I would consider to be poverty, Madam Deputy Speaker. They are out of sight and out of mind. The House should put aside some time for the subject, and there should probably be an institutional committee with ongoing oversight of the conduct, stewardship and governance of our overseas territories. At present we are singularly failing. That is in contrast to other countries: the , , and the have the equivalent of overseas territories, but they give them some limited representation in their national legislatures. We are not fulfilling our moral obligations to people in our overseas territories, and it is time that the House did so."

Mr. MacKinlay is a member of the Commons Foreign Affairs Select Committee and is the former 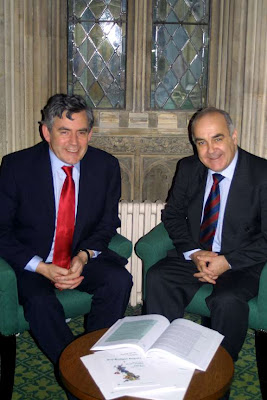 Chairperson All-Party Gibraltar Group, 1999-2000. He is one of the few truly independent members of New Labour.

It is not clear whether he is advocating an elected OT representative in Parliament. Do Bermudians, Anguillians and Tristanians have a common policy on ? How would we determine one if we needed to? Who would such a representative take instructions from? What influence could he or she have? Or would he or she be more of a lobbyist?

Mr. MacKinlay seems to be suggesting that an All-Party Select Committee be formed to have oversight of the residue of Empire, having "ongoing oversight of the conduct, stewardship and governance" of the OTs. There are presently such All-Party Committees for some of the OTs, but not for others. Some are quite active while others seem to be an excuse to visit a tropical island during the cold and grey English winter. There seems to be no coordination between these Committees.

I don't know if it would further the views of the Pitcairners or Saints with regard to foreign policy on Afghanistan, but an OT Select Committee has enormous potential to correct the present serious neglect of the important environmental and cultural treasures of the OTs. I hope Mr. MacKinley's suggestion will be encouraged by those who will soon be presenting oral testimony to the Foreign Affairs Committee.