Tim Hodge is the Director of Social Security. He is a 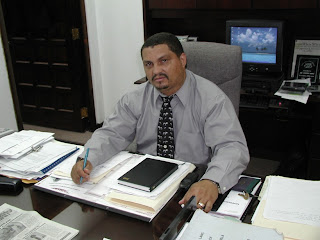 scrupulously honest person. No one is alleging any wrongdoing. The post merely asked some questions about the amount of money spent by the Board during the year 2006 on non-benefit-related matters. It suggested that the Social Security Board was keeping us in the dark about how it spent our money. In particular, it asked how the Board could justify spending so little as $5.2 million on benefits out of a total expenditure of $9.2 million in 2006. It quite reasonably, I thought, asked what the other $4 million was spent on. It compared the expenditure of the $4 million with the expenditure of various essential government departments in the year 2005.

Tim did a long emailed reply,

which I posted under comments. He sent me other messages expressing outrage at the whole post and the comments. He is convinced that the Board does its work with complete transparency. Yet, every single one of the other persons who spoke to or emailed me agreed that the manner in which the Board was functioning was a public outrage.

I could not understand why Tim found it so difficult to see the reason why people are upset and suspicious about the activities of the Social Security Board. I noticed that he made no attempt in any of his messages to respond to the substance of the guest editor’s post. I decided that the old maxim that a picture is worth a thousand words applies. Let us look together at some pictures online. I invite you to Google the words “Anguilla Social

One of the first results on your Google search would have been the Board's website. You went to the various pages. You ransacked every nook and cranny in the site. Tell me if you were able to find out any useful information on it. The most recent Annual Report published on it was for the year 2003. Who else but an archaeologist would be interested in anything as old as the year 2003?

As one of my correspondents remarked, “So mucha pages, so little news.”

Come on, Tim. You have to do better than that if there is to be any claim about transparency.