Othlyn was previously a fis 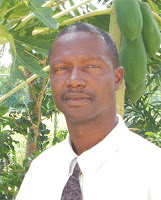 heries officer in the Ministry of Agriculture. Towards the end of his public service he served as Acting Director of Fisheries. He may have been aggrieved when he did not eventually get the permanent post. It is rumoured he was made a Special Assistant when he complained. He is a well known youth leader, being Commissioner of Scouts, and so has been given a role as Special Assistant in the area of youth, culture and sports. He keeps a low profile and seldom appears on public platforms and forums. In private life he has for many years run a very successful “chicken ranch” and pig farm in the area. His appointment is said to have been very controversial in the public service.