As British Overseas Territories Citizens, we in Anguilla bear contingent liability for Britain's policies towards other Overseas Territories. What she does and says regarding our brothers and sisters may apply to us one day! Read this article published in "Black Britain" on 6 February 2007 and be astonished.

Irony that colonialsm rears its ugly head in the Bicentenary Year

The Foreign Office today began its third attempt to get a court ruling to prevent the Chagossian community from returning to their homeland in the by dragging up colonial laws from 1865.

Acting on behalf of Foreign Office Secretary, Margaret Beckett, John Howells QC said that the May 2006 ruling which overturned the Queen’s Orders of 2004 banning their return was legally flawed. In its appeal, the Foreign Office is arguing that the 1865 Colonial Laws Validity Act gave the Queen such powers as were exercised in the Orders issued in 2004.

In court, John Howells QC said that if the May 2006 ruling had been correct it would have constituted a “revolutionary change” in the constitutional law and this would impact all British overseas territories. The appeal is expected to last five days. The Chagossians previously won two High Court rulings in 2000 and 2006.

The population of 2000 that were forcibly removed from the between 1965 and 1972 were mostly descendants of African slaves brought from and to work on the coconut plantation. The irony that is celebrating the Bicentenary of the Parliamentary Abolition of the Slave Trade in 2007, whilst using colonial law to deny their return, was not lost on their supporters outside court.

MP Jeremy Corbyn told Black Britain that it was “a disgrace” that the Foreign Office should be appealing the decision made last May; adding that that it was ironic that in 2007, the legal argument being used in the appeal “is based on colonial and imperial laws that allowed the Queen to colonise two thirds of the world.”

Minority Rights Group International (MRG), which has been supporting the legal case, is highly critical of the decision by the Foreign Office to mount an appeal. So far the cost to the taxpayer stands at £1.5 million. Speaking on Friday Clive Baldwin, MRG’s Head of Advocacy said:

"One of Margaret Beckett's first decisions as Foreign Secretary was to appeal against the High Court judgement, and therefore spend more of British taxpayers' money in trying to prevent a few thousand islanders returning to their ancestral homes, on islands which are now abandoned.” 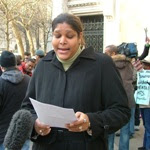 hagos Island Community Association based in , where several hundred Chagossians live, read a statement to the press outlining concerns that regardless of the outcome of case, there are still complex issues to be resolved. Part of the statement read:

“As descendants of Africans we assert our right to determine our own destiny. In this respect we are calling for a wider consultation with the Chagossian people before any decisions are made with regards to our future.”

The reason for the Chagossians’ expulsion from their homeland followed a secret deal between the and the to lease the islands for 50 years so that the could build a military base on Diego Garcia. Since acquiring the island the government has waged two wars against and . There have also been ongoing allegations that Diego Garcia is being used by US security forces, as a transit point for the controversial 'extra-ordinary renditions' programme.

The statement read by Permal said: “We demand the complete removal of the military base from the and most importantly the right to self governance and independence.”

MP Jeremy Corbyn told Black Britain that there are several issues to be dealt with if the Chagossians win the case, such as whether they become part of again or remain under , but agreed that: “Such decisions should be made by the Chagossians themselves.”

For this and related stories, see Black Britain.