The following article appeared recently in Caribbean Net News. It is of interest to those of us concerned about advancing the process of Constitutional reform in . It is important because it gives us an idea of what can be done in our negotiations with the Foreign and Commonwealth Office: 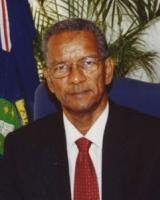 , BVI: Chief Minister of the British Virgin Islands, Dr Orlando Smith, speaking from at the end of the fourth round of constitutional talks, said the Territory's negotiating team has achieved 95% of the proposals for a modern constitution for the people of the BVI.

“We fought vigorously in the interest of the people because we knew it would be difficult, but it was the people’s wishes and we fought for their desires,” the Chief Minister said.

The new constitution will include a Human Rights Charter which the Chief Minister said his team is particularly proud of as this means for the first time BVIslanders are accorded full constitutional rights.

On the issue of the BVI having a Cabinet system of Government, the Chief Minister said that while the BVI team recognised that the Governor should still be a member of the Cabinet, the team agreed that there should be a sharing of responsibility.

“We have obtained concession in ensuring that the setting of the agenda of the Cabinet (currently Executive Council) is no longer the province of the Governor alone. It has now been agreed that the Premier should also set the agenda of the Cabinet, and the exercise of this power is not subject to the veto of the Governor or any other person,” the Chief Minister reported.

The Chief Minister said he is satisfied with the decision that there will be a sharing in responsibilities in external affairs and internal security through the establishment of a National Security Council. This Council will comprise senior Government members, as well as the Governor, who will oversee all matters relating to the police and security.

“For the first time, the BVI Government will have a direct say in how the Territory is policed and the Governor will be obliged to act on the advice of the Council,” the Chief Minister said.

On the issue of a sixth ministry, the Chief Minister said, “The UK shares our view that the growing population of the BVI means that the Constitution should allow for this position to be created in the future.”

Lord Triesman, who headed the delegation at the fourth round of talks, and the FCO Minister responsible for the , congratulated the Chief Minister and his delegation on their determination to secure the best deal for their people, while retaining the links to the of which we are all proud."