Only healthy travellers pass through Blowing Point. Most sensible people recognised that this whole H1N1 Influenza A pandemic panic was a media-driven frenzy from the start. had the worst of it. A few hundred people were infected. A total of 26 died. Deaths elsewhere from infection have been minimal. As of Tuesday, total worldwide deaths stood at 53. The math shows there is a 1 in 250 or 0.4% chance of dying. A normal annual winter flu outbreak would cause more fatalities than this one has. The H5N1 avian flu episode last year produced more fatalities. The Spanish flu pandemic of 1918 killed an estimated 30 million. The 1957 pandemic killed two million. Even the 1968 pandemic killed a million. If people die from flu in the Southern hemisphere this coming winter, and many thousands will die, the betting is it will be from the common flu, not swine flu.

Just as the epidemic everywhere in the Northern hemisphere is in decline, we in have to show our solidarity with stupidness and join in the frenzy.

Have you seen the new form they give you to fill out when you land in ? I understand this form is part of a regional initiative, and was not invented in . It looks like this: 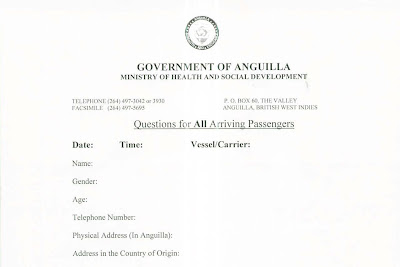 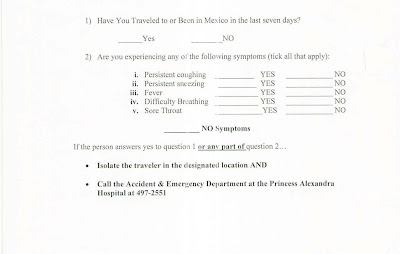 As you hustle with 40-odd other passengers for a place in the queue at Blowing Point, an Immigration Officer appears. She tells you that you must fill out this swine flu questionnaire. You have to do it before you get to Immigration. So, you fill it out while standing and being jostled in line. You take it to Immigration. The officer looks at it. She gives it back to you. She tells you to hand it in to Customs. Customs looks at it, and tosses it aside.

Or, you are among the hundreds of visitors from for the Regatta last weekend. You are arriving at an “upscale tourist destination”. So, you have arrived on your mega yacht at . Immigration makes everyone get off the boat. You take the dinghy to the beach. You find a taxi to take you to Sandy Ground. There, Immigration makes everybody fill out the form. By now, God alone knows how many people you have infected. Yes, I know you are not supposed to land at , but they do.

Didn’t the designer of this form realise I am supposed to read it before I fill it in? Did he really intend to put that final notification at the end of the form for my information? It says clearly that if I answer “Yes” to any part of the questionnaire, I am to be isolated. “Isolated” means I am to be separated from my family that I am travelling with. I will be taken away, by force, if necessary. I will then be put through various Hospital procedures. It may take days, if not weeks, before I am allowed to go about my business or enjoy my holiday. In those circumstances, which fool would answer yes to any one of the questions? Which one of us is going to admit to ever having visited ? I would suppress my cough even if I had to choke. Who would be so stupid as to admit to having sneezed in the past year.

Faced with the information at the bottom of this form, I would deny I had a fever anytime in the last ten years. Breathing would never have been easier than it is now. I would not admit to having had a sore throat since I was a child.

Whatever they intend to do with the hapless traveller who answers “Yes” to anything on this form, I think they should keep that last bit of information confidential. Let the officer spring it on him in ambush if he has answered “Yes”.

Next thing, we will be banning imports of pork meat.

Just because this is a government form does not mean that it is backed by law. It is not an Immigration form. Nor is it a Customs form. It is a hastily made up medical form. Has anybody even checked if it has the force of law behind it? Do I commit any offence if I fill it in falsely?

I seriously doubt it.