Roads that Go Nowhere. I want to take you through one last example of a road that is not a road. If you have read the previous three posts, you will know what I mean.

The surveyor's plan that we are going to look at is not chosen because there is anything particularly special about it. I suspect that the same situation that it depicts has been created all over the island. I only pick it because (a) it involves the parcel of land immediately to my north and I am familiar with it, and (b) it has only recently been brought to my attention. Let us look at it. 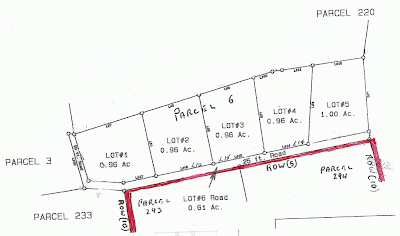 We are looking at a sub-division of Parcel 6 to the north. You will notice that Parcels 293 and 294 lie to the south of it. This is my property, where I live at North Hill. My mother’s land lies to the east, or right of the plan. You will see a right of way that skirts around my property to the west, north, and east of my land. It is painted red. That used to be a 10 ft right of way that ran through the center of my property. Several years ago, I agreed with my mother that we would relocate the road to where it now lies. We would make it a joint road. It would also benefit my neighbour immediately to the north. She owns Parcel 6. Her land was cut off and had no access to the main road, which lies some distance to the west. My road would give her land access for the first time. I contacted her in . She agreed that we should register a joint right of way along our boundaries. She told me who her lawyer was. I prepared the Grant of Easement forms provided by the Land Registry. I sent them to her lawyer to send on to her for signing and to be returned to me for registration. Months passed. Nothing happened. I repeatedly contacted the lawyer. There was no explanation why the forms were not forthcoming. I could not wait any longer to provide my mother with access in case she wished to deal in her property. I registered the forms with my signature and that of my mother. I hoped that in due course my neighbour’s forms would turn up. That is why the right of way to the west and east is 10 ft. That to the north is only 5 ft. It was supposed to be supplemented by the same amount of land from my neighbour. Her forms never turned up and were never registered. She never got a right of access to her land.

Knowing that a five-foot roadway was inadequate, I constructed my fence about 12 feet back from my boundary. I made a 12 ft road all around the property. There is physically plenty of room for a car to pass around my existing fence. That is the road I use to enter my yard.

A few weeks ago, I received a telephone call. My neighbour was outside my fence. She was showing a prospective purchaser one of the lots that Parcel 6 had been divided into. I went out to say hello. I was meeting her in person for the first time. She was there with her surveyor. I learned that the land had been subdivided. I saw the plan above for the first time. I can only describe my reaction as shock and horror. What does it depict?

First, you will notice that the subdivision includes “ #6” which is called a “Road”. You will see that it goes the full length of what used to be parcel 6 and even swings around to the west and goes nowhere. It does me no harm. I am not quarreling with it. I do feel sorry for my neighbour. The road is not a road at all! Those of you who are lawyers or surveyors or who have read the previous three articles understand that already. For those of you that are unclear, let me explain.

First, she has not been invited by government to make it a public road. She has not given it to the government. It is still registered in her name. She has not signed a transfer to the Crown. It is not a public road. Neither is it an adequate private road, or right of way. It might conceivably, if grants of easement have been registered in favour of Lots 1-5, provide easements of right of way for one over the other. Though I have not checked, given the sloppy planning here, I seriously doubt if that has been done.

Second, it is not a proper right of way. It does not take the owner of any of these lots to the nearest public road. Even if it had been given to the government, it does not connect to any other public road. It does not connect in law with my private road that runs over my land. Just as I have no right to trespass on the imaginary road called “ #6”, so she has no right to pass on my road. She can put up a notice barring me from trespassing on her #6. I could put up a barrier at the corner of my road and block any one from accessing it. We have no rights over each other’s land. This is a road that goes nowhere.

What should have been done should by now have been obvious to you, if you have been reading the previous posts. She, or her surveyor, or both of them, should have contacted me. They should have contacted the other affected landowners. They should have told us of their plans to sub-divide Parcel 6. They should have explained to us that the Land Development Control Committee is insisting that the sub-divisions have a 25 ft access road. I understand from the surveyor that this is what in fact happened. They should have pointed out to us that we had already made provision on the register and on the ground for a road. We might have been asked politely if we would agree to incorporate it into the proposed road that would be shown on the sub-division. There is no reason to believe that we would have objected. My neighbour would have got her 25 ft road. She would have lost .3 and not .61 of an acre. That is more than half an acre. She is selling one of the lots for US$150,000.00. I am no good at mathematics, but I calculate that as a completely unnecessary loss to her of US$50,000.00 in round figures.

And, she still does not have a right of access to her land!

If she tries to sell it to someone who has proper legal advice, the prospective purchaser will be told that the land has no access to a public road. No properly advised person would risk purchasing this land without a registered right of way.

Tell me if you can understand why my neighbour was advised to proceed in this way. Does this make any sense to you?

As far as I am concerned it is a complete fiasco.

What does the LDCC think it is doing?