Animal Rescue Foundation Criticises “Dolphinarium” Blog as Irresponsible. AARF is ’s premier animal protection society. It looks after any animal in distress. It reports to the authorities on acts of cruelty to animals. It should have a deep and abiding concern for ’s dolphins. Those whose principal interest lies in little puppies and pussies should not be contending with those more concerned with the plight of our endangered iguana or the holding in a prison in of eight dolphins. They have a common cause. They should be natural allies. They should not be attacking each other’s efforts on behalf of dumb and helpless animals. That causes a waste of energy and a loss of focus. So, imagine my concern, if not consternation, when the following press release dated 18 December was given to me today. 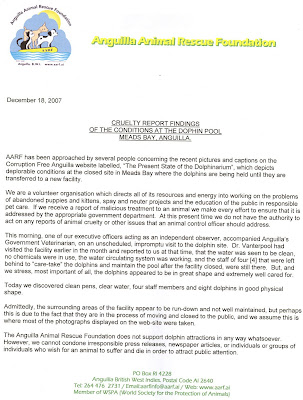 It was only on 16 December that this blog broke the story on the deplorable condition in which the dolphins were then held. Photographs taken on 11 December were shown. It was hardly an irresponsible coverage. The evidence was there before all our eyes. Now, officers of AARF have visited the site. It was two days after we reported the story here. They say they found the dolphins “in great shape and extremely well cared for”. They saw what they saw. They wrote what they wrote. They say they “cannot condone irresponsible press releases”. They condemn those “who wish for an animal to suffer and die in order to attract public attention”. This critique must refer to the blog of 16 December. There was no other press release on the subject. Unless it is Nat Hodge’s news article in Thursday’s issue of The Anguillian newspaper. He published some photographs that were not on my blog. I assume he had access to the person who took them and to those who visited the site then. He wrote his own story, and did not quote mine. He wrote, “Though not in colour, these photographs present a gruesome reality of the environment of the captive dolphins”. Enough said about conditions at that date.

Let us leap forward to today 21 December. By coincidence, one of my correspondents visited the site today. My correspondent took more photographs. Let us look at them and determine for ourselves what they show. 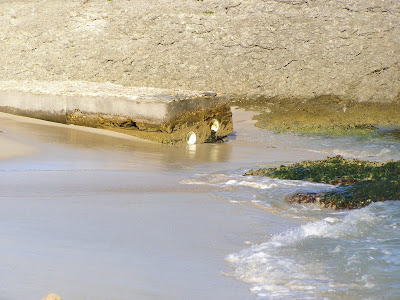 This is a shot of the outflow pipe onto the beach. It shows that the pumps are not running today. I accept that they must be capable of running to have been able to top up the tanks that are shown in the photographs of 11 December. It is very costly to run the pumps all the time. 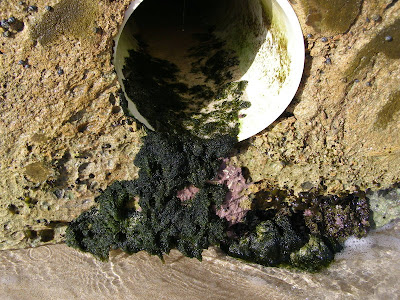 This one shows the algae oozing out of the dolphin tanks. If this is what comes out of the discharge pipe, the water can hardly be described accurately as clear and with the pens clean. One has to ask how the government vet who helped write this press release could have reported to the executive committee of AARF that “he had visited the facility earlier in the month and reported to us at that that time, that the water was seen to be clean, no chemicals were in use, the water circulating system was working . . .” This is shown by the photographs taken in early December, and earlier published, not to be true. 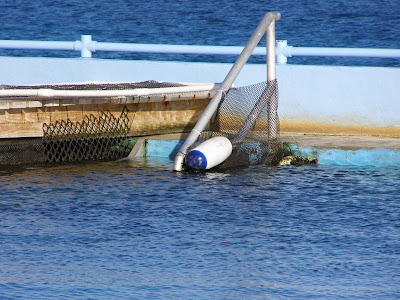 This photo shows scum and debris floating on the top of the water today. Did it all grow back since the visit of AARF on 18 December? It is difficult to see how so much algae could have grown in the few days that had passed. Did AARF miss it on their visit? 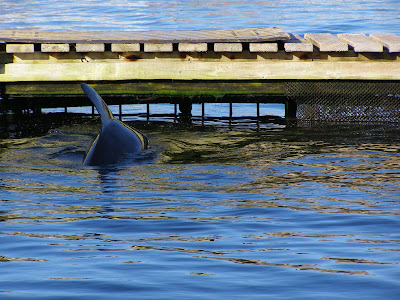 There were originally eight dolphins on the site. There are only two visible in the tank at this time. At any rate, only two were alive and well enough to swim around and show themselves today when these photographs were being taken. I am told that in the dead of the night last night, a cargo plane flew in to and, with the assistance of the local customs and veterinary authorities, four of the dolphins were shipped off the island. We are told they are going temporarily to . So, there should be four dolphins left in . Does anyone know what happened to the apparently missing two? 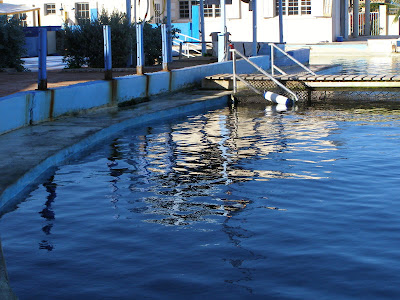 The water level in the above photograph is higher than the level shown in the photographs in the post of 16 December. The tank has obviously been topped up recently. My correspondent writes me that you have only to look into the water and you can see that while the surface of the water is relatively clear, the muck on the bottom has not been removed. It is as filthy as it was before. My correspondent’s exact words are, “I shot views to show that the water level is back up to par. It appears to me that the tank has been cleaned "cosmetically" around the edges as when I looked hard into the bottom of the tank I could see clumps of algae, etc.” It would appear that after the story broke, the dolphin people hurriedly turned back on the pumps and topped up the tanks. They did a little surface cleaning, no more than that. If the missing two dolphins are still there, it means that the water is too dirty to see them.

Those in who do not understand what all this fuss is over “a bunch of fish” must be laughing.

I am ashamed of AARF.