Unnecessary Roads. We have been discussing the improper registration of rights of way in . The day is going to come when the problems that have been storing up are going to explode. Let us hope that they can be corrected before that happens. I want us now to look at one or two practical examples. I have chosen two land sub-divisions adjacent to where I live. This is not because they are particularly special. It is just that I know the persons and the circumstances involved. Also, if any “mistake” has been made, I am not the one who suffered. If anything I, or my family, are the ones who benefited from the mistake. No one can say I am writing this out of any sense of a private grievance. If anything, I grieve for my neighbours who have been taken advantage of for my benefit, unknowing as it was.

Let us take the case of Mr D’s land first. I invite you to study the following plan. 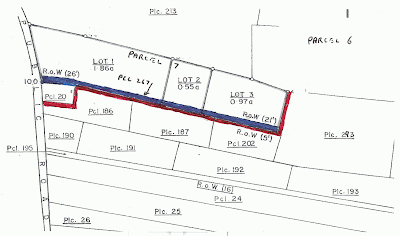 My property is to the east, or far right, Parcel 293. Daryl Richardson, known to everyone as “Mr D” is now deceased. His land lay to the immediate west of Parcel 293. It used to be registered as Parcel 7. My land derived originally from the same Parcel as Parcels 20, 186, 187 and 202, which lie to the south of the rights of way painted blue and red. Let us call it the Owen Estate. Mr D, as the owner of Parcel 7, and the administrator of the Owen Estate, agreed on a mutual right of way running up the common boundary. It was a 10 ft right of way. We have seen in an earlier article that this was the minimum width for demanded by the Chief Surveyor at the time. The Administrator gave Mr D a five foot right of way up the boundary of the Owen Estate. Mr D gave the Owen Estate a reciprocal right over his land. This mutual right of way is shown painted red on the plan above. We registered the grants of easement in the Land Registry.

Years passed. The right of way worked well. One of Mr D’s sons started building his home on what is called “ 3”. Another son started his building on what is marked “ 2”. Mr D died. He left a will leaving the land to his sons and daughter in the way he had planned it before he died. The Executor hired a land surveyor to divide Parcel 6 and distribute it as provided in the will. The surveyor knew from previous surveys that the Land Development Control Committee now requires a 26 ft access when land is being sub-divided. The result is the plan in front of you. You can see that he made provision for access westwards down to the public road for 3. He has created a separate parcel of land for it, Parcel 267. It starts off on the west at the public road 26 feet wide, and at some point becomes 21 feet wide. All of it is taken from Parcel 6. None of it comes from the Owen Estate. The surveyor was aware of the mutual 5 ft rights of way. He knew that the 5 feet added to the 21 feet would make a consistent 26 ft right of way.

What to me is extraordinary is that no effort was made by anyone to speak to the registered owners of the Owen Estate about widening the mutual right of way. There are only two of them. One of them lives on the land and the other is my mother who lives at Old Ta. The surveyor did not do it, though he is an old friend. The Executor was not told that it might be a good idea. He is my cousin, David Carty. He would have had no difficulty in making the approach, if it had been suggested to him. The surveyor simply made a 26 ft and a 21 ft provision for access out of Mr D’s land. End of discussion.

What is so irregular about this new road? You will have read the two previous articles. We discussed the law and proper practice on public and private rights of way.

First, this right of way is not registered as a public road. So, I cannot use it as of right along with other members of the public.

Second, it is not the subject of mutual easements of right of way. I cannot use it as a private right of way. It is called a “right of way” on the map. Just seeing it on the map does not give me a right to use it. I am perfectly content with the present 10 ft right of way. But, would it not have been better for the heirs of Mr D’s estate if they had negotiated with the two owners of the Owen Estate to share burden of the right of way? They would not have lost so much land.

Thirdly, the new right of way has been made into a separate parcel, Parcel 267. It is completely and fundamentally wrong to create a separate Parcel of land to constitute a right of way. A right of way cannot be a parcel of land. It is a right enjoyed by one landowner over the land of another landowner. The only conclusion I can come to is that it might be a device to block off the land so that one day the government can acquire it freely, without having to pay anybody for taking it for the public use. What is wrong with that? The normal practice all over the world is for the public to pay private landowners for the right to pass over their land. This is accomplished by government paying the landowner for the public right of way. It is only fair.

Finally, what was the use of starting the new roadway to the north of the existing right of way? Just to make a straight line? The existing roadway passed over the land designated and left by the Owens for the purpose of gaining access to the lands to the east. The present owner could have been approached about widening the present roadway from 10 feet to 26 feet. He is a very reasonable person. There is no way that I can see him refusing such a sensible provision. The narrow piece of land to the west of Parcel 186 is not capable of being used for any other purpose than the road for which it was intended. In my view it was completely unnecessary to have taken 26 feet out of the south of Mr D’s garden, while leaving the present 10 ft road just a few dozen feet away!

The surveyors tell me that there is nothing they can do. The survey will not be approved by the LDCC if there is no access. The LDCC has told them to make provision for access out of the land they are surveying. Others tell me that the LDCC has done no such thing. The LDCC has mandated that there must be access when a sub-division is being made. They do not care how it is done. They would expect the surveyors to assist their clients to negotiate with the neighbours and get them to agree on what is fair to all, a mutual right of way along their joint boundaries. If they cannot agree on this in a reasonable time, then the road provision might have to come out of one person’s land. But, that would not be the preference of the LDCC.