EIS Reports. I have been reading the two Environmental

Impact Statements provided by Dolphin Fantaseas to the Planning Department. These reports are intended to be independent, objective, expert reports prepared by environmental specialists. They are meant to assist the Planning Department in making its recommendation to government whether a particular project should be permitted as proposed. In this case, the proposal is for government to lease to the dolphinarium owners the sandy ground spit at Blowing Point just to the West of Ferryboat Inn. They will construct restaurants and other facilities on land, and pens for displaying the dolphins in the sea. The reports were supposed to advise government on the impact, among other things, of the food and feces nutrients on the surrounding sea used by swimmers, plants, and fish. They were also supposed to indicate whether the dolphins will survive the diesel and gasoline in the sea from the ferryboats and other vessels using the dock just a few yards up-current.

In the case of the report titled, “Appendix B Socioeconomic Report”, I was not able to get past the first page. Here is an extract from page 1. 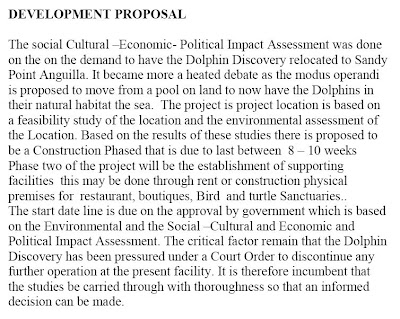 If this is the quality of the reports presented by the dolphin prison keepers, I cannot understand how government will be able to come to an informed decision.

Anyone wanting to read a copy of the reports just email me and I will send them to you.

I am awaiting expert comments on the substance of the reports. I shall report to you in due course.