“Crime Has Been Reduced this Year”. I may have misheard the Chief Minister’s Christmas message on the radio the other day. I thought I heard him congratulating us on a reducing crime rate. Crime rate down? I wondered which crime rate he was thinking of. When we compare murders in 2006 with the previous year 2005, we are looking at an increase from zero to ten. The facts are:

Ten murders. They have all been widely reported in both the local and regional press. So, he has no excuse for not knowing about them. It is painful to recap these stories, particularly for the distressed families. But, my principal concern is for those young men whose deaths in 2007 we might be able to prevent if we take the firm and dramatic action that is necessary. It is my thesis that papering over the fissures in our social fabric for the sake of feel-good tourism promotion will in the long run do more harm than good. Those murdered in Anguilla, or in relation to their activities in Anguilla, in this year 2006 were:

2. Kwahmi Brooks stabbed to death allegedly as a “loyalty” test by St Kitts-based cocaine suppliers to a young recruit in . See the story from “The Anguilla Guide” here. It was also in “The Anguillian Newspaper” here. No 8 below, Jeffrey Herbert, is alleged to have been executed on his return to St Kitts for wasting his time on the recruit and on putting him to this test.

3. Shane Fraites (22) allegedly clubbed to death at West end. Three juveniles charged with his murder. The story was carried in “The Anguilla Guide” here. It was also in “The Anguillian Newspaper” here. 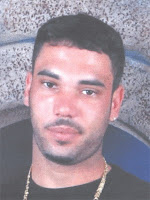 ouvan Webster Jr (22) missing on a trip from to St Maarten, allegedly murdered in a cocaine deal gone wrong. The story was carried by “The Anguillian Newspaper” here.

5. Michael Gumbs allegedly a marijuana-induced-schizophrenic, shot to death by a police officer in self-defence at The Quarter.

6. James Wilkinson shot to death in St Kitts after being deported from where he had allegedly been dealing cocaine. The story was partially carried in “The Democrat Newspaper” here.

7. Deon Warner (25) of shot in his face and killed in Nevis allegedly in a drug deal gone bad. The story was carried in various issues of the “St Kitts Nevis Observer” here, and here and here.

8. Jeffrey Herbert (33) allegedly executed by his gang boss in St Kitts after being deported from . Information is that he was punished for having failed to carry out his assigned “hit” on an Anguillian cocaine dealer who had not been paying for his supplies. See a short mention of the killing on the Royal St Kitts & Nevis Police Force website here, and in the St Kitts Nevis Observer here.

9. Steven Bryan killed in prison where he was on remand awaiting trial for the 2003 murder of schoolgirl Jamida Webster, whose brutally butchered body had been left draped in a tree in what looks suspiciously like a typical Columbian-style punishment killing. See the story in the Anguillian Newspaper here

10. Clifford Christie (19) stabbed to death in a senseless incident at a cricket match at the Webster Park in November. The story was carried by The Anguillian Newspaper here.

And these are just the murders! They do not include the innumerable burglaries, robberies, shootings, knifings, and rapes, not to mention the related child abuse and spousal abuse cases flowing in an ever-widening stream from ’s rising addiction to cocaine and guns. How could these incidents be described as “crime has been reduced this year”? God alone knows what 2007 holds in store for us!