“Good Governance”. As reported in The Anguillian Newspaper, “Commissioner of Police in Anguilla, 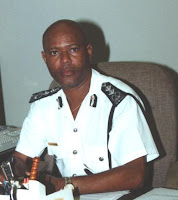 Keithley Benjamin, wept as he read the formal remembrance of ‘Constable Gerald Bardouille’s journey with the Royal Anguilla Police Force’ at the Thanksgiving Service on Saturday, April 29, at St. Mary’s Anglican Church . . . The 35-year-old Constable Gerald Bardouille, originally from the Commonwealth of Dominica, died tragically on April 8, when the police jeep he was driving collided with a section of the Magistrate’s Court, while on his way to Police Headquarters. Ironically, he was reportedly retuning from an accident scene at , his last duty for the day. His colleague in the passenger seat, Constable Rayfield Roberts, a St. Vincent national, suffered serious injury and is receiving treatment in .” A correspondent has allowed me to publish the following contribution on the matter:

“Some months ago a police officer returning to headquarters with another officer drove his patrol car into the court house, killing himself, seriously injuring the other officer and destroying the vehicle. Unsupported allegations were made on the internet suggesting the officer might have been drinking on duty, that the vehicle's brakes were faulty, that this was the fault of improper maintenance by either Public Works or a private contractor, and that the officer had been the cause of other, previous road accidents.

It was then suggested that we should stop speculating and allow the police to do their job (investigating themselves) and await their report. Of course, no report has ever been made public.

It has been suggested that the report has been withheld because it contains evidence of liability that might be used by the injured officer or the surviving relatives of the deceased in pursuing a claim for civil damages. If, indeed, such a civil matter were filed, it would be a simple thing for the claimant's lawyer to obtain a copy of the secret report. Accordingly, this is not a valid reason to withhold the findings from the public. How does it serve the people to withhold this information from us?

There is a serious lack of transparency, accountability and openness pervading . Those in London and those they send here cannot conspire with our own corrupt leaders to cause us to feel excluded from our own instruments of government, deny us the right to see public documents, make all important decisions behind closed doors where everyone is sworn to secrecy and deny us an ombudsman, or any recourse to the courts without paying an overpriced lawyer to do the most trivial foolishness, without making us feel like a flea trying to change the direction his dog is going.

I'd like to know what caused this tragic accident. But of far greater importance, I'd like to know why the people of are treated in an arrogant and condescending manner by both those who we elect to represent us and those sent here by Her Majesty.

Governor George, what is your position on this specific matter and what are you doing to implement the requirements of the recent FCO White Paper on Good Governance?”

I think he makes a valid point, don’t you? The public is entitled by law to know what the cause of PC Gerald Bardouille’s death was. That is what inquests are for.