Robert FX Sillerman’s back!  He may have told everybody that he has no talent in real estate.  But, he sure has talent for dealing with the government of .  His team has recently put together a 30-page marketing presentation to persuade investors to take over the Flag Luxury Resort project in .  The presentation reveals that in July of this year he concluded a terrific deal with government.  It brings him back in charge of Flag, and has breathed life into this failed project.  He is using this presentation to invite new investors in the Flag project.  The presentation tells us a number of things.  For one thing, from the cover we learn that the new project will be called Temenos Resort, . 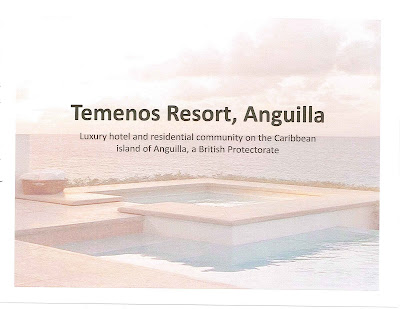 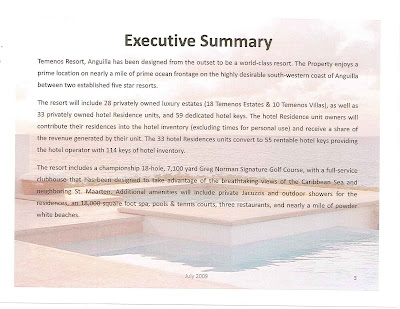 2. Page 3 reveals that it is really the same old project completely unchanged.

3. Page 4 indicates that the new investors will acquire $180 million of ‘first and second lien’ debt for $100 million.  No doubt that is clear to our cousins.  Since “first and second lien debt” has no meaning in Anguillian law, I have no idea what they wanted to say.  I suspect they meant to say that Credit Suisse, and perhaps Sillerman himself, are selling out their charges cheap. 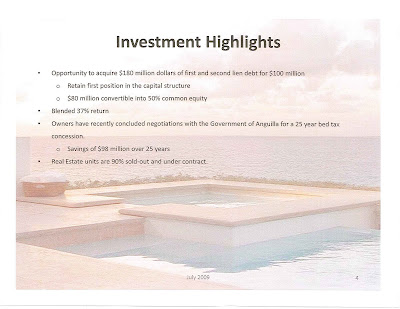 Most extraordinarily from the same page 4 we learn that the “owners” have recently concluded negotiations with government for “a 25 year bed tax concession” which we learn is worth $98 million over the same 25 years!!  We knew about the tax concession, but now we learn the amount of the give away.

4. From page 8 it appears to be the same project.  It is just being refinanced.  With us giving them $98 million of public revenue to sweeten the deal!  No question of one acre of land being refunded.  I am glad we do not take responsibility for the golf course, as government was proposing at one time.  But still . . . accommodation tax is supposed to be a major part of our revenue.  Government has given up collecting it for 25 years.  How are they going to pay their public servants and other obligations? 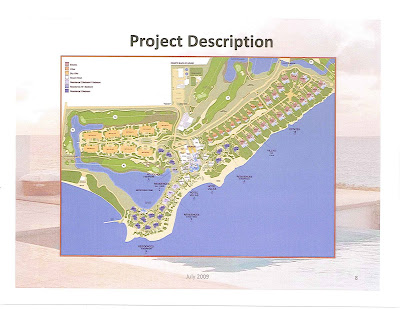 There is one worry.  Since the US economy is not expected to turn around until the last quarter of 2011, I am not sure who is going to come forward to make this happen. 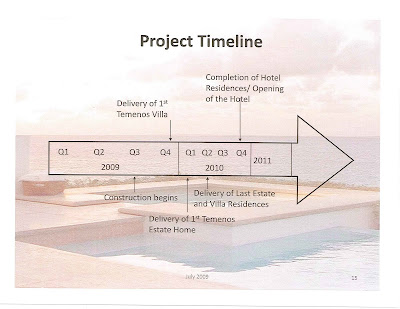 6. Page 16 is quite revealing.  It states that Mr Sillerman enjoys “a great deal of local support for the project”.  I have no idea what local support he could be referring to.  I rather thought that both Government and Opposition had publicly and repeatedly washed their hands of him.

Anybody remember the Chief Minister’s actual words the last time on the subject of Mr Sillerman? 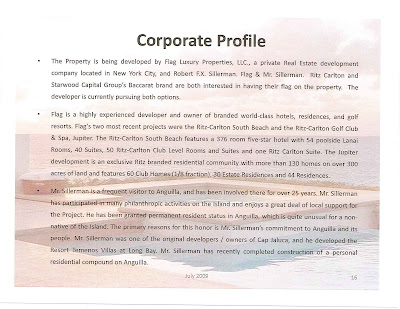 7. Page 22 contains some vital figures.  It calls itself “Key Financial Data”.  From it, we learn that some $200 million has to be raised to bring this project to completion.  We also learn that it will take the trivial figure of $40 million to buy out the existing lenders.  Credit Suisse has obviously agreed to lie down and play dead in exchange for $40 million.  Any takers? 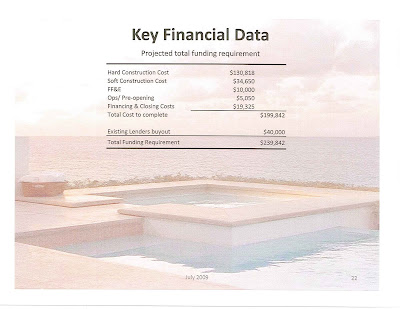 It looks like the government of was not joking when they announced a few months ago in the House of Assembly that they were thinking of ways to bail out this project.  Have you any idea what US$98 million represents?  That is more than a quarter of a billion EC dollars.  Some bail out!

No doubt, this development will be presented as a major triumph for the party in power when the upcoming elections are announced.  But, why have they been silent about the figures up to now?

Who said Mr Sillerman knew nothing about the real estate business?