How to destroy the tourism sector and go back to raising goats. has a limited amount of public access to the beach. Most roads go as far as a hotel, and then you must access the beach by foot through the hotel grounds. Not that that little encumbrance will stop the most enterprising of our entrepreneurs from getting their stock and trade onto the public beach when they want to do some hustling.

My attention was caught by a recent post on the Anguilla Guide Forum.

The post suggests that there is a beach bar built on the beach. That is illegal, as every Anguillian school child knows. It is illegal so long as the relevant government officers do their duty. Of course, with sufficient of an incentive they can always wink an eye and look the other way. Just to find out what was going on, I decided to take a drive down to Rendezvous Bay and find out for myself. This is what I found: 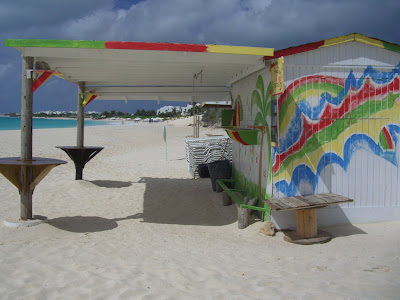 It was midday, but the Sunshine Shack was closed up. There was no one I could find to ask the most obvious questions. Who gave you permission to trespass on the public beach? Are you licensed? I could see they were selling drinks. There was a cooler and the post above said so. Their drinks were said to be very good. You are not allowed to sell any drinks at all unless you have a restaurant licence or a liquor licence. I could tell they were serving food. There was a grill securely chained to the beach chairs. 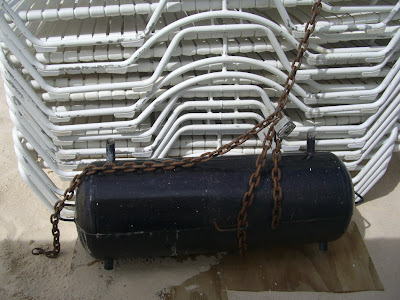 So, I turned around and looked about. Were my eyes deceiving me? Were those tyre tracks in the sand? That is a complete no-no. No one is permitted to drive a vehicle on the beaches of . So, I enquired from passers by. Had they seen a vehicle driving by? Yes, they said. There is a white jeep that comes to the Sunshine Shack every day bringing supplies. Unbelievable! Where did it come from? It came onto the beach from the public road to the beach next to the Anguilla Great House, was the reply. So, I went to have a look. 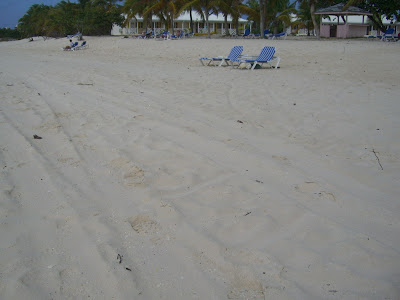 Sure enough, I could see the tracks of a motor vehicle passing and re-passing in front of the hotel. You can see it for yourself. What in the world, I wondered, did Mr Fleming think about that assault on the sensitivities of his guests? I decided to come back to Sunshine Shack when there were people around. 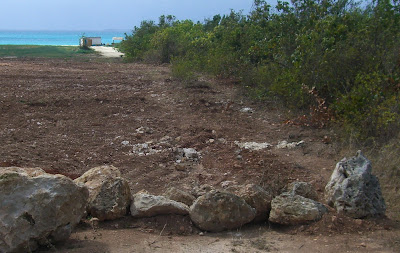 On my way out, I discovered the road that must have originally led to the shack had been cut off by boulders. No wonder the entrepreneurs were using the public beach. But, who had given them the right to do so? 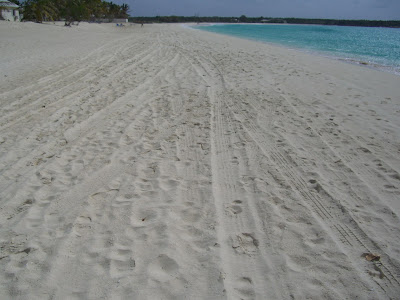 I decided to ask Vincent Proctor of the Physical Planning Department and Karim Hodge of the Environmental Department what they knew about this trespass. They are our guardians of our public beaches. We depend on them not to slack off. So, I wrote:

We all want to encourage local business. But, not if it is illegal. I class operating a beach bar to serve food and liquor to the public without a liquor or restaurant licence in the same category of activity as selling cocaine. No doubt that is just my obsession with things being done legally.

Grateful to know if you knew about this, and what your position is on the question.”

Needless to say, after several days of waiting there has been no response, far less any explanation for this outrageous new development.

On Saturday 21 February, I finally caught up with the proprietors of the beach shack. Three fierce young men approached me. They were not at all happy that I was photographing their establishment. 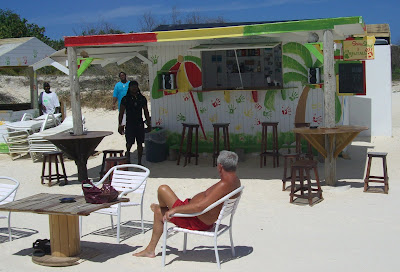 I could see the liquor bottles on the shelves behind the bar counter. Then, I made out some sort of official-looking government licenses tacked to the wall behind. Somebody had evidently given them some kind of permission. I could not get close enough to the licences to see what they were for. 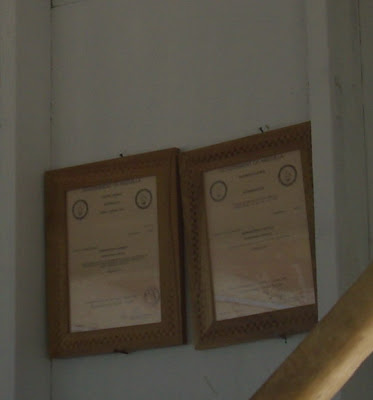 “You are not allowed to take photographs here!” That was all the encouragement I needed to high-tail it out of there. I guess that must have been one of the friendly proprietors, Garvey, Perry or Leon, speaking.

I do feel bad for the children. They will never be able to enjoy the rights that we once did.