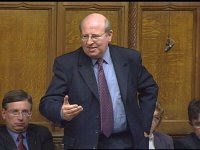 We take a break from considering fundamental rights and the right to life.  Something urgent has come up that I need to consider.  Mike Gapes MP (photo left) and his Foreign Affairs Committee have just put out another report affecting us in the British Overseas Territories.  After having read it, I am concerned.  It would appear that the Foreign and Commonwealth Office is refusing to accept responsibility for the decline of good government in the .  They are holding up reform by refusing to fund the necessary prosecutions.  The inevitable result, I fear, will be the British Government’s international embarrassment.
The FAC is about to be dissolved as heads into general elections.  There will be a new Committee from about May 7.  Before being dissolved, the FAC has done us the favour of producing this Report.  It analyses and summarises where the Interim Government of the TCI is in investigating and prosecuting the crimes of the previous government and in putting in place mechanisms that will ensure that such a state of affairs as we have seen over the past 5 years does not easily happen again.
The Report is not very long (read it here).  I urge you to read it for yourself.  The appendices, titled “Written Evidence”, provide startling new information to the effect that the FCO has not understood the extent to which it is responsible for the decline in governmental standards in our Territories.  The gnomes of appear to have taken the view that it is the responsibility of Territories such as TCI and to fund their own investigations, prosecutions, and reforms.  All those experts presenting evidence to the FAC, except those coming from within the FCO, were unanimously of a different view.  It is the responsibility of the British Government to produce the necessary funds.  If this is not done, the inevitable outcome of reductions in public service salaries and the laying off of surplus workers will be that the public will view the reforms as having come at the expense of income and jobs of the locals.  The risk is that the reforms will be rejected as having cost too much.  That is in addition to the point that the island budgets could never raise the necessary funds.
As Special Prosecutor Helen Garlick reported, the budget for her prosecutorial team to the end of next year is ₤6.8 million.  At 4 to 1, that would be EC$27.2 million.  That is just the beginning, as the figure does not include the cost of any actual prosecutions.  We can assume that figure will double and triple once prosecutions begin.  This is an enormous cost for a small-island territory to bear. 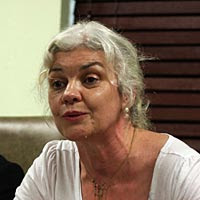 Helen Garlick, Special Prosecutor, TCI
As the old maxim has it, a stitch in time saves nine.  If the FCO had only done its oversight job properly in the first place, this expense would not have had to be incurred.
Paragraph 14 is relevant to us in .  It reads:
14. Although this Report deals specifically with issues relating to TCI, a number of concerns have been brought to our attention in relation to allegations of corruption and poor governance in other —for example, in .  We recommend that the Government should supply us with a memorandum setting out in detail what support is provided by the Government to each of the individual Territory governments to assist them in tackling corruption and maintaining standards of good governance.  In the event that it is not possible to supply this information to us before the dissolution of the present Parliament, we recommend that the Government should make it available to our successor Committee in the next Parliament when it begins its work.
Those three sentences raise a spark of hope in our breasts that someone in understands the needs of these for reform in our system of governance.  Whether the FCO will live up to its responsibilities is another matter.  Only time will tell, bearing in mind that the likelihood is that there will be a new government in place in the in a few short weeks.  New policies will surely sweep away the old ones.
We have got to keep our focus on the need to reform our Constitution to put in place an entirely new regime of checks and balances designed to ensure that the risk of political and administrative abuse is minimised.
Anguillians have to be concerned that under any new government the FCO will continue to refuse to fund good governance programmes in the and will wash their hands of us at the end of the day, leaving us to become yet another failed banana-republic state.
Posted by idmitch at Tuesday, April 06, 2010