The Department of Physical Planning has a Website. It is dedicated to the work of the Land Development Control Committee.

But, does anyone ever look at this website? It is not very well publicised. If you go to the official website of the Government of Anguilla, it will be difficult for you to find a trace of its existence. It is there, though. It just takes hours of searching to find it. It is in the Government Directory. Look under the Chief Minister’s Office.

When you do locate the Planning Department’s website, a couple of ominous things immediately come to your attention. First, the home page features a link to something called the “Physical Planning Act”.

The only problem is that there is no such Act. The Bill was never passed into law by the House of Assembly. It was withdrawn by government. One has to wonder how many persons have been misled by this publication. Any layman reading the Bill, which is set out in full, will almost inevitably believe that the Bill is law. The words “A Bill for” appear eventually, after you have opened the document. Those words are easy to miss. The whole thing is presented on the home page as a valid Act of the House of Assembly. It is even called the "Physical Planning Act 2001". Government would never publish a lie, would it?

You have to wonder. Have even some lawyers been misled? How many persons have been tricked into believing that this is really the law of Anguilla since the year 2001? 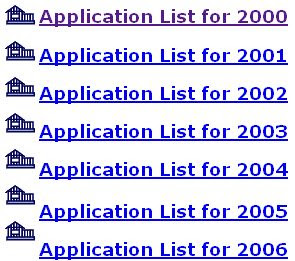 Then, everything stops. No more information. What about all the planning applications in 2007 and 2008? How do I find out if my neighbour has applied to put up a plastics factory next door to my home? How do I get this information? The website is silent after the year 2006.

The last time the website was updated is stated to be on July 14 2006. Since then, the website appears to have been abandoned.

The year 2006 is more than two years ago. Why would this be? Did the person who updated the website leave government’s service? Was it just too onerous to continue giving this information? Is it an oversight, or was it a policy decision to hide planning applications made after 2006? Since there is no explanation, we can only speculate.

I am too embarrassed to call anyone in Physical Planning to find out how this misleading website comes to be published.
Posted by idmitch at Tuesday, September 16, 2008