The Foreign and Commonwealth Office has published its response to the Report of the Foreign Affairs Committee. 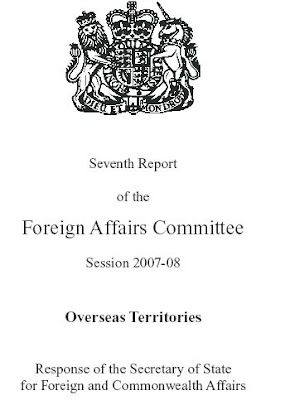 The part dealing with Anguilla starts at paragraph 63. It reads:

63. The Governor of Anguilla continually monitors governance issues in , including possible cases of corruption. In the first instance it is for the Territory Government and competent authorities to investigate allegations of bribery. No substantive evidence has come to the Governor’s attention that Anguillian Ministers have accepted bribes from developers. The Chief Minister of has publicly rejected the allegations. Nevertheless, the Governor will ask the Government of Anguilla to explain how they plan to deal with the allegations made to the Committee. The Government will inform the Committee of the response.

64. The Government agrees that the constitutional review process is an opportunity to introduce improved good government measures in . That is why the Government encourages Territories to move the process forward, while respecting the position that it is for the Territories to bring forward proposals for reform.

It is more than I expected.

It will be interesting to see what the final report of the FAC will look like.

It will be even more interesting to see what the response of our government will be to the Governor’s question.