Is it Illegal to Build a Villa on a Beach. I received the following email. I thought of just answering it. Then, I thought, “Why not make it a post?” This is the result. First, the email:

Sunset Homes is building a large beach front villa next to Bananas by the Sea on . The place is huge. I thought beachfront personal dwellings were against the law in . Also, Viceroy has erected a large sales office right on the beach - how can that be allowed? Photo attached.” 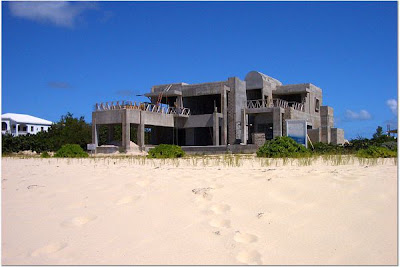 First, on the building of beach villas, generally. No, there is no law against building a beachfront villa. For this to be prohibited would mean that there is in some sort of enforceable zoning or planning law that is being infringed. Those of you who read this blog regularly, will by now be aware that there is no enforceable Planning Act in . Such law as there is, is so antiquated and irrelevant to modern town and country planning concepts as to be laughable. It is a law that we inherited from the old St Kitts Administration, before the Revolution of 1967.

Second, Yes, there was a policy at one time of making it difficult for villas to be built on the beachfront. Early in Emile Gumbs’ administration, after people complained about Chuck Norris being given permission to purchase a lot of land on , the government established and published a policy that in future no licences would be given for the building of a villa on a beach. Villas were relatively non-productive, and would be discouraged. Beaches were to be reserved for the development of ’s tourism plant, ie, hotels.

When a non-Anguillian applies for an Aliens Landholding Licence, as is obligatory, to own property on , it is a simple matter to prohibit the acquisition of land on a beach for the purpose of building a villa. Aliens were not allowed to do it. When it came to an Anguillian building on a beach, that tool or leverage never existed. The Anguillian is not required to apply for any licence to build on a beach. There is no law restricting building on the beachfront. Any officer of the Planning Department who contemplated prohibiting an Anguillian from building on a beach would have been slapped down by the Attorney-General’s Department. It is the Attorney-General who would advise on any action by any Department that will have legal consequences, at least, the strong likelihood of having to defend a legal suit. The A-G would know that such a case could not be won. So, even before the policy of using administrative discretion to limit building on beaches was relaxed, Anguillians have been building on the beachfront.

Third, is the question of fronting. Fronting occurs when an Anguillian pretends to own some or all of a business or property in order to assist the real, foreign, owner from having to comply with alien taxes and other burdens. When the property is land or a business, the Anguillian puts his name forward to government as the owner. When the property is a company, the Anguillian holds some or all of the shares and directorships “in trust” for the foreigner. The share ownership is accompanied by pre-signed, undated share transfers to permit a swift and unilateral transfer of the shares out of the hands of the Anguillian. This is generally a crime. That has never stopped it happening. Law firms have been accused of doing it. Politicians have been alleged to do it. Some civil servants are said to supplement their meager income by doing it. Even ordinary Anguillians do it. It is one of the commonest industries in today. Many of the fine “locally owned” developments on the island are owned and funded by foreigners. When the development is sold, the Anguillian is supposed to receive his compensation by way of a small but healthy percentage of the proceeds of sale.

What these foreign speculators are only now beginning to learn is that, unless the illegal fronting is organised by an attorney with experience in these matters, they are likely to get ripped off by the Anguillian. What typically happens is that the Anguillian holds out for more than the agreed reward. He pretends that he thought he was really the majority owner. He then threatens to put a spoke in the works unless the demanded payment is made.

I have no idea who owns Sunset Homes. Nor, have I any reason to believe they are doing anything illegal. They probably fall into the category of an Anguillian owner doing what he wants with his own land. That is not against the law.

That is simply evidence of not yet being mature enough to establish clear and fair planning laws.