And now for something quite different.  A few weeks ago, Wycliffe Richardson, the owner and manager of ATV3, suggested that I do a series of 15-30 minute TV presentations on legal issues in .  We have now produced over a dozen scripts.
Some of the first ones dealt with the elections law.  They were broadcast in the weeks before our recently concluded general elections.
Wycliffe Richardson
When the elections were over, he suggested that I do a review of the Constitution, highlighting some of the major issues.  Constitutional reform should be high on the agenda of the new Government.  Anguilla and Montserrat are the only in the that have not completed the process of reviewing and updating our Constitutions.
So, let us look at some of the constitutional issues that I feel are worth considering.
When discussing the Anguilla Constitution of 1982, it is as well to start at the beginning.  If you should thumb through the Constitution, as one is wont to do in spare moments, the first thing you come to is Chapter 1, Protection of Fundamental Rights and Freedoms.  The Golden Rule that you should treat others as you would have them treat you is of great antiquity, the foundation of some of the great religions.  By contrast, the concept of fundamental human rights and freedoms is not something natural to humanity that has existed since time immemorial, through all cultures and nations.  Many of us do not realise that the concept is a relatively modern one, a product of the Holocaust and World War II.
It is only recently that it has been generally accepted that we human beings have fundamental rights.  Modern recorded history begins with the invention of writing some 3-4,000 years ago.  During most of the succeeding time, up until the end of the Second World War, we lived under various regimes that cheerfully permitted our governments to hang, draw and quarter any of us whose lives were deemed to be contrary to the public interest.  It was only when the General Assembly of the United Nations adopted and proclaimed the Universal Declaration of Human Rights that everything changed.
For this we have to thank a widow, Eleanor Roosevelt.  Eleanor Roosevelt had been the First Lady of the while her husband, Franklin D Roosevelt, was the President of the from 1933 to 1945.  After his death, President Harry S Truman made her a member of the delegation to the United Nations.  There, she was elected to chair the committee that drafted and approved the Universal Declaration.  She played an instrumental role in drafting the Declaration, calling it “the international Magna Carta of all mankind”.  The Declaration was adopted by the UN General Assembly on 10 December 1948.  The vote of the General Assembly was unanimous, except for eight abstentions, by Muslim countries which took exception to the implications of the Declaration as to freedom in marriage.  President Truman called her “The First Lady of the World” in tribute to her human rights achievements. 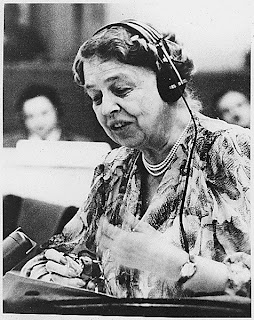 Eleanor Roosevelt at the United Nations
As the Preamble to the Universal Declaration says:
Whereas recognition of the inherent dignity and of the equal and inalienable rights of all members of the human family is the foundation of freedom, justice and peace in the world, and
Whereas disregard and contempt for human rights have resulted in barbarous acts, which have outraged the conscience of mankind, and the advent of a world in which human beings shall enjoy freedom of speech and belief, and freedom from fear and want, has been proclaimed as the highest aspiration of the common people, and
Whereas it is essential, if man is not to be compelled to have recourse, as a last resort, to rebellion against tyranny and oppression, that human rights should be protected by the rule of law, and
Whereas it is essential to promote the development of friendly relations between nations, and
Whereas the peoples of the United Nations have in the Charter reaffirmed their faith in fundamental human rights, in the dignity and worth of the human person, and in the equal rights of men and women, and have determined to promote social progress and better standards of life in larger freedom.
This Preamble is followed by 30 Articles that enumerate the fundamental rights of all persons.  Since 1948, any government offending against the fundamental rights of its people is liable to find itself and its leaders charged before the court with offences of Crimes against Humanity.  It was from this date that all humans were perceived as enjoying universal rights, including the right to life.
Not all of the fundamental rights recognised by the Universal Declaration are repeated in our Constitution.  But, what we can say, is that those rights that are recognised in our Constitution draw their origin and raison d’etre from the Universal Declaration.
So, Chapter 1 of the Constitution of Anguilla begins with section 1, a recital of the fundamental rights and freedoms of the individual.  It provides that every person in is entitled to life, liberty, security of the person, the enjoyment of property, and protection of the law, freedom of conscience, of expression and of peaceful assembly and association, and respect for his private and family life.  There are limits to the protection under the Constitution.  Principally, our enjoyment of our fundamental rights is subject to respect for the rights and freedoms of others, and for the public interest.
I believe that it is worth remembering that in addition to our rights being enshrined in our Anguilla Constitution, they are also grounded and based in the United Nations Universal Declaration of Human Rights.
Posted by idmitch at Wednesday, March 31, 2010