Why is it not appropriate for the Commissioner of Police of Anguilla on his retirement to be appointed Magistrate of ?  It is unfortunate that I have to ask this question.  The answer should be obvious to all.  The answer is that such an appointment will tend to undermine public confidence in the administration of justice, and to bring the judiciary into contempt.  Just in case there is one single person out there who does not  see the point immediately, let me try my best to explain why this is so.

In addition to the obvious conflicts of interest and questions of bias raised, there is the fundamental question of the separation of powers.  At least since the time of the Duc de Montesquieu, the principle of separation of powers has been an intrinsic foundation of the rule of law.  Ask any first year law student.

The consequence is that for a person who served as the senior executive officer of the police force to move directly into the position of Magistrate of Anguilla, without even a cooling off period of several years, is to induce such mistrust and misgivings in society as will tend to undermine the administration of justice in this country.

What am I going to think about the sort of justice I am going to get if, when I respond to the summons, and turn up in court on Monday morning, and the man, who just a few scant months ago was the chief investigator into the charges brought against, me is sitting there with a smile on his face asking me how do I plead to the charge?  To say that I would feel outrage is the least of it.

Then, there is the question of qualification.  It is not written in a law anywhere that I recall, but, a stipendiary Magistrate in the Leeward Islands, ie, one who is a qualified lawyer and who is paid a salary, has not since at least the 1890s been considered to be properly qualified unless he or she is a licensed barrister or attorney at law who has practised at the Bar for a minimum period of 5 years prior to the appointment.  The reason for this rule is well known to all legal practitioners.  Only a practicing attorney will be attuned to the finer points of the rules of evidence and of law.  When the Commissioner of Anguilla cabled me in 1976 in St Kitts and invited me to come to to be the Magistrate, his cable said in part, “We understand you have been a practicing barrister for the past five years . . .”  By that, he meant that in his opinion I had the minimum qualification.

This is particularly important when you are aware of the legal history of .  Some 30 years and more ago, in the year 1978 to be exact, had not yet re-joined the Eastern Caribbean Supreme Court.  We were finding it difficult to get a judge to conduct the Criminal Assizes in .  The Anguilla House of Assembly, in an attempt to speed up justice and to reduce the backlog of indictable cases, enacted a law making almost every felony and misdemeanour, excepting only murder, manslaughter and rape, triable by the Magistrate.  The Magistrate of Anguilla undoubtedly has the widest jurisdiction of any Magistrate anywhere in the .  It is a grave responsibility to be the Magistrate of Anguilla.  Only an attorney, not only well-learned in the principles of law, but also well-schooled in the practice of law, will be considered by the Bar to be capable of dispensing justice in such a court to the people of .  Academic qualification alone is not sufficient.

In the case of our Commissioner, it is true that he went to law school.  It is true that he received both a bachelor of laws and a legal education certificate.  He is academically qualified to be a Magistrate.  But, this occurred some 10 to 15 years ago.  Since then, he has functioned solely as an officer within the police force.  He may have appeared as a prosecutor once or twice in the early days, but not in the past 10 years to my knowledge.  As such, in my opinion, he is completely unqualified for the job.

There is nothing wrong with a police officer rising to fill the post of Magistrate.  Many of us older heads know the story of John Lynch-Wade.  He served for nearly 30 years as Chief of Police of St Kitts.  He was the Chief of Police in Basseterre at the time of the Anguilla Revolution of 1967, and was alive and well when I last greeted him not a year ago.  When ‘Chiefie Wade’ retired, he went to UWI in and studied law.  On receiving his LlB, he went on to law school in and obtained his legal education certificate.  He returned to St Kitts where he practised law for several years.  He was then placed on contract to be a Magistrate.  He functioned so well, that he rose to be the most senior Magistrate in St Kitts.  He filled that post for many years, until, a few years ago, he retired much loved and appreciated.  But, you see the difference, I hope.

It is not as if this is the first time we have raised this issue in .  I can well remember when a young Crown Counsel returned from to about 15 years ago.  Some Attorney-General made the idiotic recommendation to have him appointed as the Magistrate of Anguilla shortly after he returned from completing his education.  The Bar Association went on strike, and caused an uproar.  The Magistrate in question was told in no uncertain terms that no barrister would permit his or her client to appear before him, as he was not qualified to dispense justice in a court of law.  He quietly allowed himself to be transferred to Administration, from which he has now risen to be the Deputy Governor of .

And now, he is on the verge, the cusp, of making the same mistake all over again. 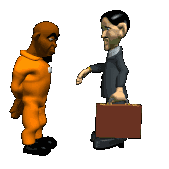