Dolphinarium Construction Begins at Blowing Point. I really am not focused on the dolphins. They are the national symbol of . Their exploitation by a Mexican company, with the connivance of Anguillian officials, for the amusement and entertainment of hamburger-eating cruise ship passengers from neighbouring St Maarten, is curious at least. The general opposition to the project in has not moved our government. Other than that, I have no interest in dolphins.

The three dolphins on the rebel flag shown above stand for friendship, wisdom and strength, according to the website Flagspot. The three dolphins are coloured orange to represent endurance, unity and strength. The circle stands for continuity. The flag has a white background, for peace and tranquility, with a turquoise-blue base representing the surrounding sea and also faith, youth and hope. What irony!

The current official flag shown above, a blue ensign with a dolphin badge, was adopted on 30 May 1990 with much pride and fanfare. I remember the events well. As I recall, Colville Petty served as Chair of the committee, and I was a naïve and enthusiastic member of it. Little did I know at the time what use we were to make of these intelligent and friendly symbols not twenty years later.

The story that catches my interest is the report that the relocation of the dolphinarium from to Sandy Ground and now to Blowing Point has not been conducted within the rules and laws that govern . Official approval and encouragement of wrongdoing is the real meat in the dolphin story. The Land Development Control Committee advising government has placed reliance on Environmental Impact Statements that have been described by the experts as mere “lobbying documents, insubstantial and shallow”. Their decision to approve the project in the face of all the evidence that it is of no advantage to ’s tourism plant, causes most Anguillians to wonder. The Anguilla Hotel and Tourism Association is in the process of conducting a poll among its members. Preliminary results indicate that upwards of 90% are opposed to it, on the ground that none of ’s tourists and few Anguillian residents visit it. Placing a wild animal circus in a high-end city suburb has never been a town and country planner’s idea of how to add value and improve the environment!

This Saturday’s Daily Herald Weekender section carries a front page story by Suzanne Koelega detailing the whole sad chronicle of events. It is an eye-opener for anyone who is not familiar the story.

Here are some photos of the new construction under way. You can draw your own conclusions. 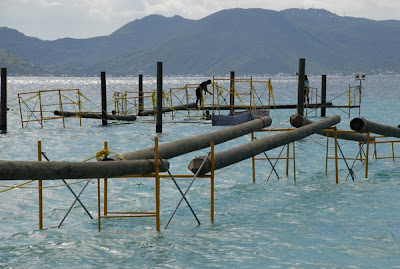 This shows one of the pens under construction. 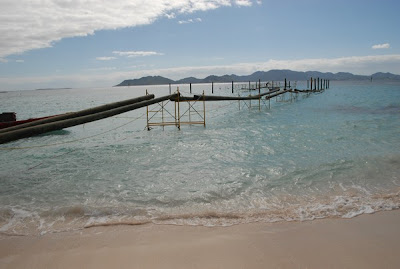 This shows what I imagine will be the jetty out to the pens. 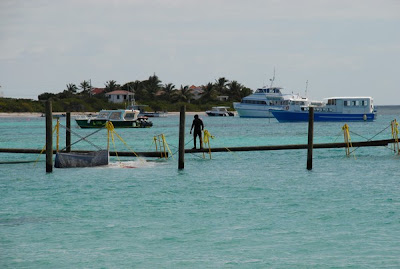 This shows the ferries at Blowing Point harbour, moored not more than a couple of hundred yards away, up-current from where the dolphins will be caged. I understand the EIS reports hopefully that the diesel and gasoline and the noise of the engines will have no adverse effect on the captive animals. 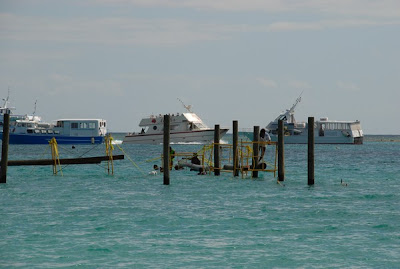 The above photo shows one of the ferries darting out of the harbour, just a few yards up from one of the new dolphin pens under construction. You do not have to be a dolphin expert to imagine what damage this activity will do to the caged animals with their delicate echo-location equipment being assaulted twice every half hour in this fashion. Not to mention all the inevitable spilled fuel and oil. But, then we all know that dolphins like to swim in dirty water, and suffer no adverse effect from it. 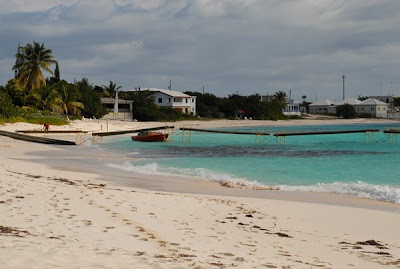 I had thought that the new dolphin facility would be on the actual sandy spit at Blowing Point. We have been referring to it as the new dolphinarium “at ”. However, the above photo shows it being constructed some distance to the east of the spit, and close to the business places and the ferry terminal just to the east and in the near background of the photograph. 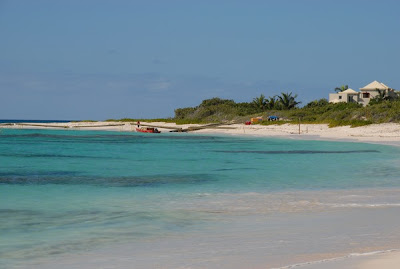 Then, of course, there are the new homes that are going up to the west, down current from the dolphinarium. You can see one going up to the right of the above photograph. Heaven alone knows what it will be like to swim in all that rotting, uneaten, dead fish and dolphin excrement that will be flowing in their direction. And, where will the Anguillians who used to picnic on this pristine location go to enjoy themselves in the future? And, what is going to happen to these “fish” when the next, inevitable hurricane strikes?

I am told that one bus driver who has a lucrative contract to take the cruise ship passengers from St Maarten, who are the main users of the dolphinarium, and two ferry boat operators, who have similar contracts, were the only lobbyists in favour of the dolphinarium. Their alleged mortgages outweighed all the other interests in moving the government of the day to approve the project.

How will the Hon Hubert Hughes answer to his political constituents when the inevitable merde hits the propeller, I ask myself? As the Chief Minister has admitted in another context, “Mistakes have been made.” 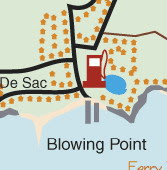