Colombian Exposition at LA Cafe. Rumza, otherwise known as LA Cafe, is in tatters. It has lain more or less abandoned the past couple of years. The fanfare surrounding the big “disco” openings have all turned out to be just noise and no substance. The structure itself is dilapidated, a shell of what it once was. The armed men patrolling the premises at all hours of the night are no more.

Someone has organised a 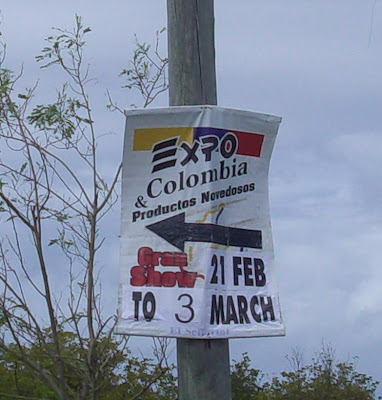 “Colombian Exposition” on the premises. It is to last for 11 days until 3rd March. I went to visit it on Sunday. It cost me EC$5.00 just to get in. The items on sale are not cheap. But, the product at LA Café always was expensive! I saw containers in the yard, and about 30 sales people who might have been Colombians. The premises are divided up into at least 40 tiny counters selling product of one kind or another.

Every chintzy gadget you can imagine is on display. Imitation gold, flashy jewelry. Battery-operated gadgets. Pseudo-medical cures that would not be allowed into any country with proper regulation. A guy with a computer and a machine that looks at your retina. It can tell you whether you have any disease. It can detect everything from liver disease to “stress”. Devices guaranteed to enlarge various body parts. The most exciting find was the “Colombian snail slime”. It is being sold in cream and lotions. It is guaranteed to cure wrinkles and arthritis. I am so excited about the news that I hasten to share it with you!

There are unanswered questions. Are the containers of stuff in the yard also from ? Does anyone know what came in them? Did the visitors pay duties on everything? Did they get special work permits, or were they exempted?

One has to ask who in government let these people in, and what is it all about?

Do you suppose the Colombians are giving money to the Ruthwill Auditorium?