To the Point. On Monday 24 September 2007 Chief Minister Osborne Fleming was the guest on the radio talk show, “To the Point”. Host Elkin Richardson has scored a major coup. What a relief it was for most of us to hear the Chief Minister shine a torch in some of the darkest corners of the labour and environmental issues that concern us! If only he could have been doing this regularly! One of my correspondents described the programme in words that I cannot better. I copy him verbatim as follows:

The Chief Minister was on "To the Point" last night. He went through the history of the dolphins in . Most of the story we already know well. 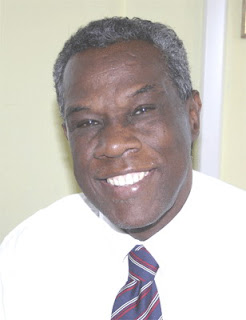 He stated that when Dolphin Fantaseas first applied there was quite a bit of opposition from the community. He was in the opposition at the time and had nothing to do with the original approval, which was Hubert's.

He said that at the time, unlike now, the economic and employment situation in was not that good, so the application was favourably received. What I hope I heard him saying between the lines is that things have changed and we don't need low class circus sideshows any longer.

He confirmed that Viceroy and DF were in court last week and DF was ordered to cease doing business at their present location. He didn't say if or when they were ordered to vacate. Most or all employees were laid off. They came to see him. He told them this was a matter for the court, and he thus could not interfere.

This is true as regards to the dispute over possession, but probably does not apply to the application to move to Blowing Point. Strangely, he never mentioned this issue and was never asked about it.

Elkin asked him if there was nothing he could do for the employees. He said all he could do is try to use "moral suasion" to get Viceroy to change their position. I don't think Viceroy wants a low class circus sideshow in the middle of their five-star resort.

It seems to me that if it seemed likely or even possible that the move to Blowing Point would be approved, he would have made some reference to this, or at least to some vague "other arrangements." He did not.

Of greatest interest, he stated that the Mexicans he found building the pen at Mariners did not have work permits and were on the island illegally. So why did they continue to work there, and why were they used to removing the pilings? And they are still there? Why are they still there? Why haven't they been deported?

Elkin asked if DF hadn't misinterpreted Planning approval for final approval to move to Sandy Ground. The CM said no, the document from Planning said right on it that they still had to apply for a permit to use the foreshore.

It appears to me that DF may have screwed themselves by bringing in illegal workers and ignoring conditions of Planning. This is not a good way to get the CM's help.