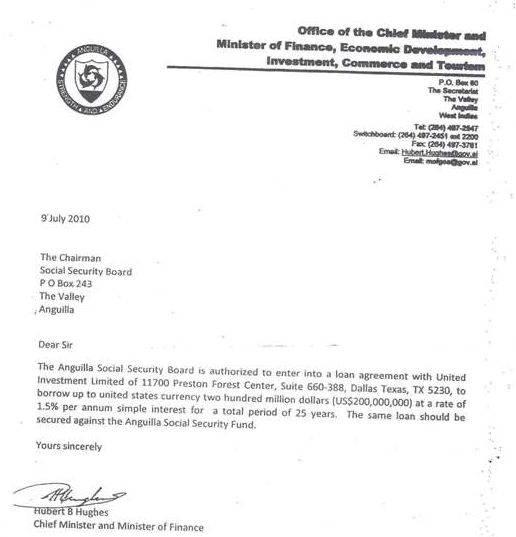 The letter authorises Social Security to borrow up to US$200 million from United Investment Limited of Austin, Texas.  The letter authorises the use of the Social Security Fund to be the security for the loan.  I need not remind you that that Fund is the contributors’ money.  It is not the money of the government of Anguilla or of the members of the Social Security Board.  The Board has strictly limited powers to invest the Fund.  They are charged with what I consider a sacred duty to invest the monies in the Fund for the advantage of the owners, the contributors to the Fund.  Before they begin negotiating with a supposed lender about putting the Fund up as security, we would expect that they would do their due diligence to ensure they are dealing with a reputable institution.
For such a supposedly major financier, United Investment Limited's website is remarkable for the many grammatical and punctuation errors on its various pages.  Whoever the owners are, and despite the numbers they quote, they seem not to be big enough to employ someone to proof-read their website content.  You might almost think that their promotional materials on the website were written by a semi-literate schoolchild, rather than by the marketing department of a major financier.  It is also remarkably lacking in any solid information about the company or its work.
If you do a little detective work and investigate United Investment Limited further, this is what you find:
This tells us that the United Investment Limited website was created by one Kirby Gonzales in 2006.  In 2006, Kirby advertised the company as "an OEM manufacturer and Distributor of building electrical supplies and tools for constuction of housing, commercial, medical and educational institutes. We also sell Petroleum and Gas profucts." Yet, in the space of four short years, the company now claims the ability to lend or to arrange a loan of upwards of US$200 million.  That is quite an extraordinary accomplishment.
If you go to the corporationwiki.com website, you will find a list of other companies formed by Kirby and Stacy Gonzales.  From the addresses of their various companies, it seems that they operate out of Trinidad and Tobago.  It would appear to me that Kirby and Stacy are in the business, among others, of creating shell companies in Texas.  A shell company is one that is barely worth the paper its certificate is printed on.
Of course, the matter may just have been an advance-fee fraud.  This is a lucrative but dishonest business.  It involves a person calling himself an investment adviser pretending to desperate borrowers that he can find easy, cheap money for them to borrow.  All the borrower has to do is to pay in advance a fee of a few thousand dollars to be introduced to the lender.  It is usually demanded towards the end of the transaction when the desperate borrower feels the deal is about to close.  Once the fee is paid you never hear from the investment adviser again, and the lender mysteriously disappears.  In which case, we may have risked losing only a few thousand US dollars.  I am not suggesting that is what happened here.  Indeed, there is no evidence that any advance fee was asked for or paid.
For the loan to have been authorised by government it would need to have been approved by the Executive Council.  Heaven alone knows how ExCo could have authorised the Chief Minister to sign such a thing as that letter.  The whole transaction should have been suspicious from the start.  It appears to have been a proposition that almost suckered in our Chief Minister.  Fortunately, the transaction seems to have been stopped by someone who did his due diligence.  In my opinion, the due diligence should have been done before the Chief Minister was asked to sign the letter.
This is all very disturbing.  If you were unkind and wanted to be sarcastic you might say that this incident clearly indicates that Anguilla needs to declare immediate independence so that our leaders can work for the people without the interference of the “meddling British”.
Related posts:
Fevered
Secured loans
Posted by idmitch at Wednesday, October 06, 2010