Maundays Bay Beach suffers by far the most egregious of the encroachments on the ancient public right of access to the beaches. According to my information, the land records show three access points for the public to get to beach. These are at the east, centre, and west of the beach. At various times over the years, every government of has addressed the Anguillian public and declared that the owners of Cap Juluca Hotel, or the new owners, understood the importance of maintaining the public rights of way. Chief Ministers have made much publicized tours, and insisted from time to time that the security gate be taken down. One such much publicised tour of the hotel took place as recently as 19 February 2007. In spite of these warnings and demands, the security gate, and the hindrance to the right of way that it constitutes, remains in place. Indeed, it has recently been renovated and enlarged.

The eastern access to is found by turning left after you pass the security gate and enter the hotel driveway. The car park is marked by a sign, “Public parking”. Pimms Restaurant lies a hundred feet further on, and has a car park that we often used when the public car park was full. 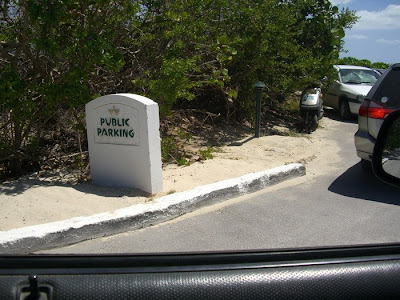 There used to be a sign indicating “public access to the beach”, where the track now leads from the public car park, past the hotel spa or “wellness centre”, to the beach. It disappeared after the passage of Hurricane Omar in October 2008. In its place is a new sign pointing to the "main house" and the "wellness centre". 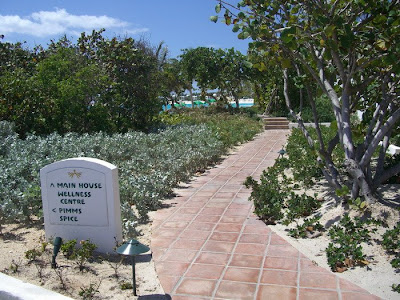 After Hurricane Omar, the public beach access sign at the start of the pathway to the spa was removed. Either the hurricane destroyed it or the opportunity was taken to remove it during the renovations. If the hurricane destroyed the sign, it has not been replaced, as it should have been. The hotel has replaced other damaged signs. New signs have gone up. There is now a prominent new sign a few feet before the public car park indicating access from to Cove Bay. 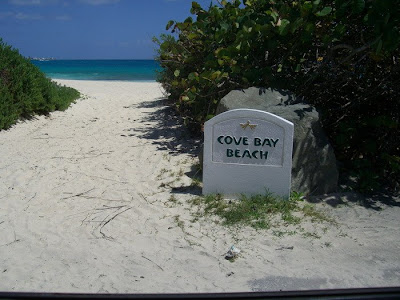 If you take the paved pathway past the fitness centre, you will see persons who appear to be visitors to the island sitting on their folding chairs with their coolers that they have brought with them. 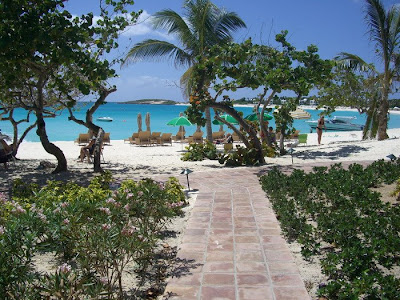 The public foot path to the beach at the eastern end of the beach, with what appears to be non-residents sitting on their personal folding chairs, and with their coolers of drinks next to them

I no longer see Anguillians taking advantage of this now semi-concealed amenity. Since the sea grape trees have been largely removed, shade is at a premium. Only a few persons at a time can use this spot to enjoy the beach and the sea. 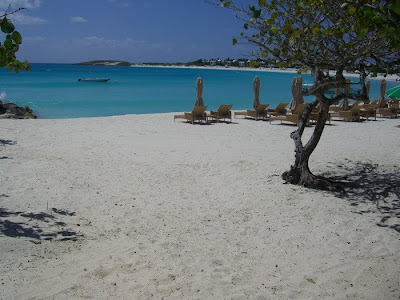 At this eastern end of Maundays Bay Beach, access to the beach must be achieved by submitting to questioning by security guards at the gate about what your business is at the hotel, and then sneaking down to the beach either via the walkway to the Spa or using the path next to Pimms Restaurant. 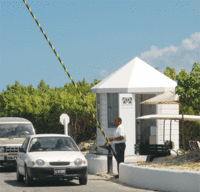 The hut in 2007 with the gate post in action

This procedure seem designed to make the prospective visitor to the beach feel like a trespasser. Only a visitor to the island, easily identifiable as the one driving a vehicle with a rental licence plate, is likely to be waved through security without having to submit to such cross-examination.


Government after government has promised us that the hotel has been warned to remove the security gate from where it is. It blocks the public right of way. 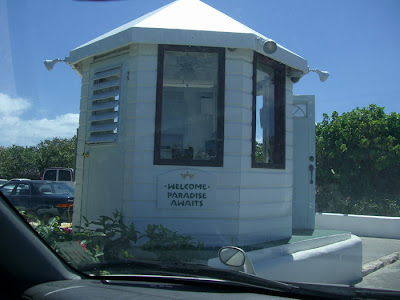 The new and improved hut close up

It is an improper erection. After a few years, the likelihood is that the hotel is going to claim that the road is no longer public, and that they have successfully defeated the public right to use it. A public right of way can be lost due to non use. The hotel should be obliged to remove the security hut and barrier to the area of Blue Restaurant. That is where the private villas of the hotel guests properly begin.

The central access to the beach is at the restaurant previously called “Georges” and now called “Blue Restaurant”. I do not remember ever seeing a sign indicating that there was public parking at the restaurant, or that the public had a right to use the beach.

For us locals, access to the centre of the Bay is out of the question. I have on occasion said to the security guard at the hut, “I am going to the beach”, pointing to the restaurant on the right, and been directed to go to the left and to use the public car park at the eastern end. I have got to the central access by saying that I was going to the restaurant. I still do not understand why I have to explain to the staff posted at the gate on the public roadway that I am going either to the beach or to the restaurant. There is no sign of a right of public access to the beach at Blues Restaurant. If there ever was, the recent expansion has obliterated all trace of it.

If any reader of this post has had no problem driving to Blue Restaurant to access the beach, consider whether you might have been driving a rental car or otherwise looked like a tourist rather than a local. That might have made a difference in your treatment by the security staff at the guard hut. 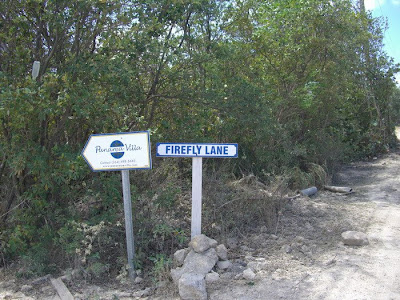 The entrance to Firefly lane

You drive down towards the sea. 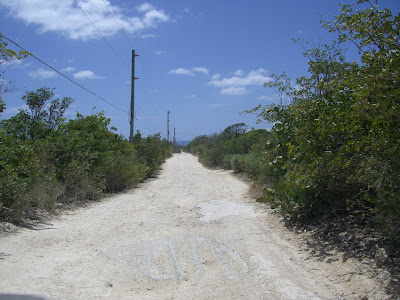 To get to the western end of the beach, you drive down to the service gate to the hotel. 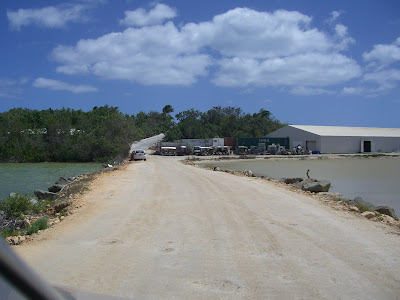 Before the gate, you turn right, following the sandy road until it pierces the dune and gives way to the sea. 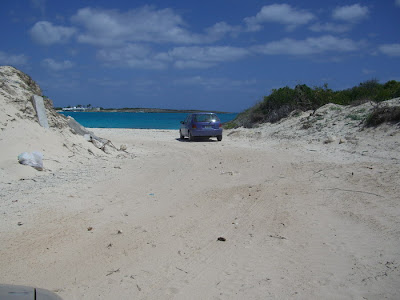 Public access to the west of the beach through the dune 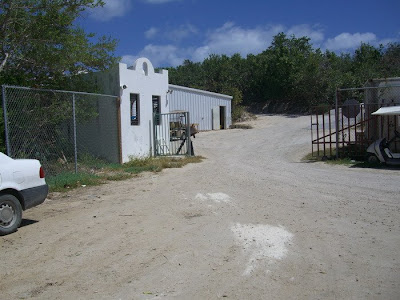 The western security gate to the hotel

One problem with this access is the hotel’s use of it, once you cross the causeway through the pond, to store derelict vehicles and equipment all along the length of the road on both sides of it. This road appears to be used by the hotel as a dump for old and damaged furniture and furnishings. 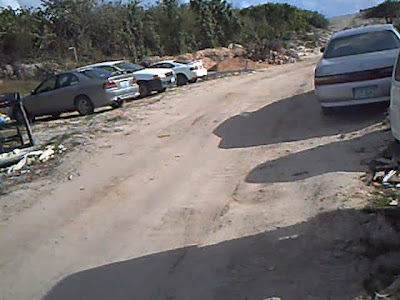 It is the most unsightly public beach access I have encountered anywhere in the . 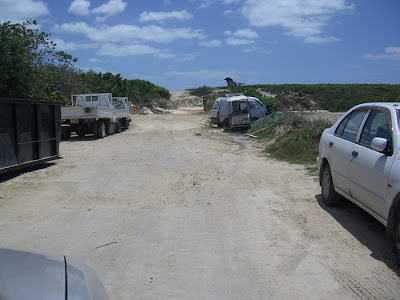 Another view of the western access road to the beach

The unsightly dumped equipment also restricts the amount of parking that used to be available to the public. 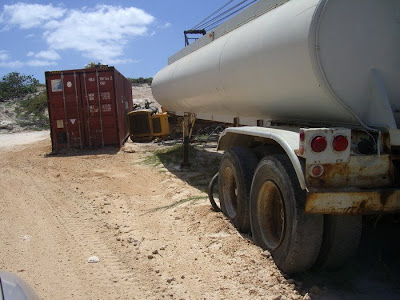 Some of the derelict equipment alongside the western access road

This access is little used. You seldom see anyone enjoying the beach at this point. You can understand the reason why.

So that, in effect, the only sign at indicating where the public may park is the public car park sign at the Pimms Restaurant end of the beach. There is no sign at all indicating that the public have the right to use the public beach.

I know the new owners have spent a fortune on renovating and improving the facilities for the enjoyment of their guests, and, hopefully, one day, to make a profit. They deserve all our cooperation and encouragement. But, that does not extend to giving up any one of the three public access to what is arguably one of the best beaches in .

I do not blame the hotel for not putting up public access signs. That is the responsibility of the relevant government agency. I do not blame the hotel for not taking down the security hut. It makes their guests feel comfortable. It is entirely for the appropriate government agency to bring a prosecution for the obstruction of the public right. I don’t blame the public service for the lack of action. They await instructions from the political heads of their departments to commence action. I am sure they would be happy to act once directed to do so. But, it seems they are not going to get instructions. It appears that the gift of an ambulance coincided with the loss of will to enforce the Chief Minister’s demands that the public access to the beach be unimpeded. Was that all it took to persuade our leaders to look the other way as the public access roads to this beach have been silently and slowly eroded? Negligence, self-interest and compromise of the public interest are but some of the characteristics of an unprincipled government.

I feel sorry for the children. In a few years time they will not even know the rights their parents used to enjoy.