Tourism Sales Brochures. I am too sickened by the results of the House of Lords decision in the Chagos Islands case to be able to write anything coherent on it right now. I'll come back to it when I am calmer.

The past week has been spent chain-sawing the forty-odd thirty-foot-high trees that were blown over on my property. The perimeter fence was damaged by falling trees in eight different spots. You have no idea how long it takes a sixty-two year old man to chainsaw forty trees and then to pull the branches and logs into heaps for burning. I figure I am about three-quarters of the way to restoring the yard to some semblance of normalcy. More on this, with photos, in a later post.

Instead, I thought I would share a light moment with you. A friend sent me three photographs taken at random from the sales brochures of two Anguilla tourism projects. 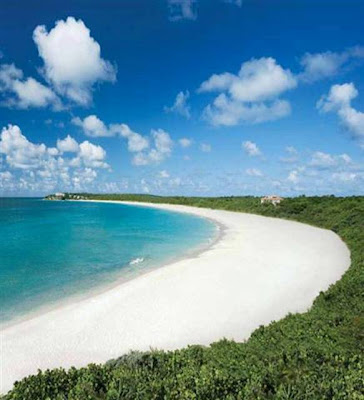 Viceroy's brochure labels this as “Meades Bay”. Now, as every Anguillian school child knows, there is no Meades Bay in Anguilla. The Viceroy project is partly built on Meads Bay. It is mainly constructed on Barnes Bay beach. But, this photograph bears no resemblance to Anguilla's Meads Bay. Not the Meads Bay of today, nor of twenty years ago before it was spoiled by all the development on it, nor of fifteen hundred years ago when only the Amerindians lived here. 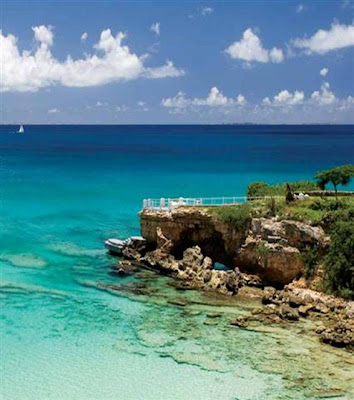 That is the title given to this spot in the Viceroy sales brochure. We all recognise the scene. It is the idyllic look-out point that used to exist at Coccoloba Hotel. It is now buried under about 1,200 tons of concrete. 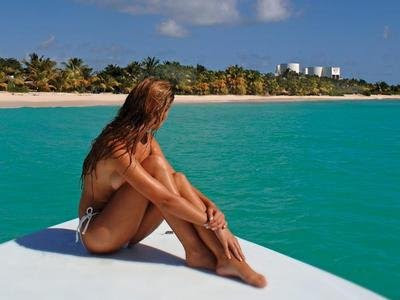 The above photo is taken from the Altamer brochure. Altamer is built at Shoal Bay West beach. The buildings were designed by Myron Goldfinger. Note the Myron-type buildings shown in the background. Note also the topless girl. She does a great job of covering up the overlaps from Photoshop. The only problem is that there is no such beach at Shoal Bay West. Nor is there any such beach, or combination of beaches, anywhere in Anguilla.

As my friend says, and I agree with him, any connection between these sales brochures and the packages of goods on offer is purely coincidental.