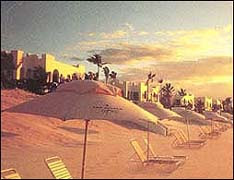 There are stomach-churning reasons why we in are apprehensive about the involvement of National Bank of Anguilla, its directors and advisers, and government’s advisers and public servants, in the company Anguilla National Tourism Investment, usually abbreviated to ANTIL. These officers, directors, and advisers have been whispering not so quietly in government’s ears that government is entitled to block the sale of Cap Juluca’s remaining leasehold interest to the foreign-owned entity Gencom unless they comply with government’s new policy.

This new policy involves rewriting the lease to force the new purchasers to include a significant number of Anguillians in its ownership. It also involves giving back or surrendering a tract of land and pond to be used allegedly for a “national park”. Needless to say, there is no national park legislation to regulate any public lands in . It is not clear how this would work. This new policy has been written for government by the same public officers and government advisers. These public officers and government advisers have formed ANTIL to compete with Gencom. They are lobbying with government to put pressure on the owners of Cap Juluca to sell to them at a lower price rather than for the better price they are being offered by Gencom. They justify this outrageous conduct by arguing that they are doing it in the interest of all Anguillians who want to see more local ownership in the heights of the tourism industry, represented by Cap Juluca.

I am apprehensive for a number of reasons. One of them has to do with “legitimate expectation.” That is a phrase that is pregnant with meaning in law. Dion Friedland used it in his recent open letter to the Anguillian public published in all the newspapers. He did not use the phrase because he likes big words. He used it because his lawyers were sending a message to government. What does the phrase mean? It means, among other things, that Friedland claims a legal right to expect government to act fairly. Government cannot tell Friedland that he must sell, and then, when he has found a purchaser who is willing to pay him his price, turn around and tell him that it does not approve of his purchaser unless the purchaser gives back to government large tracts of land and gives undertakings to do other things that are not in the original lease and licence.

The situation as described above cries out for a law suit to be brought against all those involved. The legal costs and damages will be in the tens of millions of dollars, US dollars. I have not heard anyone offering to compensate the owners of Cap Juluca for the breach of their legitimate expectation to be treated fairly. But, someone will pay. That will more likely than not be us, the tax payers of . Keep that phrase in mind in the coming months. My expectation is that you are going to hear more about it. My fear is that not just government, but NBA and ANTIL are going to hear about it. Is it any wonder my stomach churns every time I hear mention of ANTIL?

With that, I am finished with this series of posts on ANTIL, for now . . .