Cap Juluca Hotel is one of the 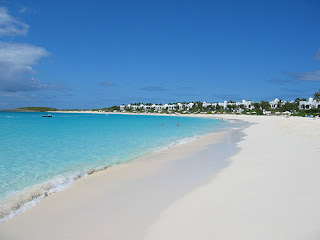 premier tourist hotels in . Well, it used to be. It is going rapidly downhill. It is rundown. It is no longer the jewel it once was. Instead of investing some of the profits in maintenance and upgrading, all of the income of the hotel for the past twenty years has been frittered away in law suits among the owners. The result has been that Government has told the owners that it is fed up with them, and Government would like to see them sell to someone who will concentrate on renovating and upgrading the property.

So, Cap Juluca’s future ownership has been in the news. The ANTIL-Firesky Group is one of its would-be purchasers. The Anguilla National Tourism Investment Ltd, or ANTIL, is a grouping of local Anguillians. They are partnering with a foreign group called Firesky in bidding to purchase Cap Juluca. Another would-be owner is the Gencom Group. Dion Friedland, one of the principal owners of Cap Juluca, has published a release stating categorically that he has a binding agreement to sell to Gencom. He is not going to deal with ANTIL. He is not even talking to ANTIL. ANTIL, have not given up. They have published a large number of press releases in the media over the past few months claiming that they have a solid case to be the purchasers of Cap Juluca. They have been holding “town hall meetings” throughout the island explaining their motives and plans for Cap Juluca with a view to build public support for their bid.

Marcel Fahie is one of the promoters of ANTIL. No one doubts his personal integrity and good intentions. He has very eloquently defended ANTIL’s intentions at a series of “town hall meetings” throughout the island. Having recently heard him and other members of his team explaining why ANTIL would be a better option as owner of Cap Juluca, I am convinced. We all want the hotel to be owned by a competent hotel company that will preserve and improve the hotel and the many Anguillian jobs that are involved. The best purchaser of all would be someone who partners with Anguillians, someone who would look after the best interests of the employees and interests of . That is what ANTIL is proposing to do. Gencom has no such plans. Clearly, any loyal Anguillian would prefer ANTIL over Gencom to be the future owner of Cap Juluca.

Why then is it that I still feel so uneasy? Why does my stomach churn whenever I contemplate ANTIL? Is it an unreasonable feeling, or is it justified?