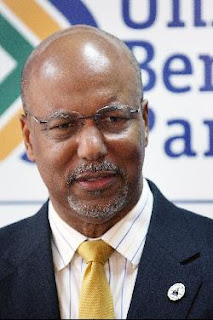 The government and opposition have got it right.  They have amended their Rules of Procedure in their House of Assembly.  Their Public Accounts Committee meetings are now being held in public.  The Public Accounts Committee is the standing committee of the House, chaired by the leader of the opposition or his nominee, which calls in civil servants to examine them on pain of perjury on how they spent the peoples’ money.
PAC Chairman, Bob Richards
The Bermuda PAC has regularly met for many years.  But, until now they have met in private.  Neither the press nor interested citizens have been admitted to hear the questioning.  After a long campaign by the Royal Gazette Newspaper, government and the opposition have now relented.  The discussions will no long be secret.
There is no chance that this reform will come soon to .  We are still several years behind in presenting the public accounts to the House of Assembly.  I seem to recall that the most recent set of audited accounts relate to the year 2006.  Opposition leader Macniel Rogers is unlikely to want to examine any public servant about the present set of accounts before the House.  After all, they relate to expenditure during the period when his administration was in power.  There is nothing he will want to quarrel about in those accounts.  He is likely to want to wait until the accounts for the year 2010 are published to call a meeting of the   On present evidence that will not happen until the year 2014.
Will the Hubert Hughes government use its best efforts to get the PAC set up?  It is in their interest to do so, as they will have four years of accounts spread over the next four years to delve in and to expose any questionable expenditure they discover.  If they do set up the PAC, will they do their best to have it actually meet?  Will they amend the Rules of Procedure to ensure that any such hearings will take place in public?
I, for one, am not holding my breath.  It seems to me that transparency and accountability are only electioneering slogans.
Posted by idmitch at Friday, July 02, 2010