Accountability. I have obtained a copy of the Airport Project financial report presented earlier this week by the Hon Victor Banks, Minister of Finance, to Members of the House of Assembly at the request of the Hon Edison Baird. I read it and had an immediate allergic reaction. I realise I could comment on it in temperate language. Intemperate language, I find, is the best antihystamine.

We will all remember that Mr Baird had complained approximately one year ago in the House of Assembly that there were rumours that some proprietors of land taken by government for the airport extension project had received many more times the value of compensation that other equally deserving proprietors had received. He demanded a list of the value of the compensation paid to each proprietor so that he could determine if there was any truth to that rumour. The Minister of Finance denied that anyone had been singled out for special compensation. He promised to produce a complete accounting, listing the amount of value in land, money or whatever, that each proprietor received so that everyone could see how transparent and accountable this government was.

The document that Mr Banks has now produced is 8 pages long. He said at the time he distributed it that it was incomplete. Some information had not yet been received. Some transactions are incomplete. But, you would expect that, for those transactions that are complete, all the information is in the report. You would be wrong.

I have scanned the document into my computer. I can let anybody who wants to receive a copy of the complete document have it by email, if you send me a request. 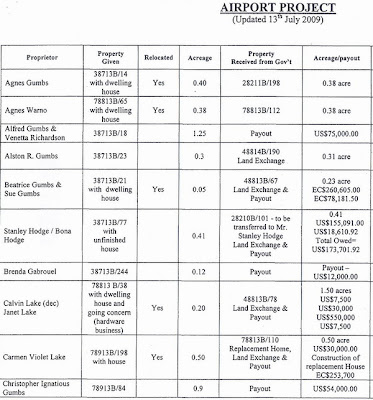 The first thing you notice when you read the entire document is that it omits the most expensive piece of property acquired. I cannot find ’s family land mentioned on the list of names at all. There is no reason why that acquisition should have been omitted from the accounting on the Airport Project. It was an intrinsic part of the airport extension project. I do not know the value of the land acquired but it was several acres. At a guess it is probably worth as much as all the land and property listed. It may not yet have been paid for, but it has to be paid for in due course, and government must have had it valued and knows what it expects to pay.

In other words, the accounting that Mr Banks has produced may not cover one half of the property acquired. That is woefully inadequate. He gave no reason for his omission to give any amount of compensation already paid to the Lake family, and any estimate of what the government expects to pay in all for the property.

The second thing you notice is that in the sixth column, ‘Acreage/payout’, only the area of land and any money paid in cash is listed. There is no estimate of the value of the property given by the proprietor, or the value of the property given by government. There must have been some attempt by the Land Valuation Department to value the individual properties being acquired. Mr Baird was entitled to know that any particular property being acquired was valued at a particular amount. Similarly, there must have been a value put to the land that was being offered in exchange.

If, say, in exchange for a house on a quarter of an acre of land altogether worth $500,000.00, government gave the proprietor (i) a half an acre of land worth, say, $100,000.00, (ii) cash of $20,000.00, and (iii) a replacement house that cost $480,000.00 to build, then, if the list contains only the first two items, it will have accounted for only 20% of the total amount of compensation actually paid. And, we will not know how close to or far away from the value of the property taken was the total amount of compensation paid. This is information that government already has. It has already taken one year to produce this account.

There is no reason I can discern why the Ministry of Finance cannot instantly put its hands on the figures for the cost of building each replacement home. Don’t tell me that no account was kept of it, house by house. They had to know that they had agreed to build for a particular proprietor a three-bedroom house costing, say, $500,000.

We will recall that, in relation to the proposed 500 ft extension to the east of the airport, PS Larry Franklin assured us just a scant few days ago that:

4. There are already procurement guidelines for the Government of Anguilla. There will be project oversight by the permanent secretaries in Finance, Economic Development and Infrastructure. There is a functioning Internal Audit Department and I expect the Internal Audit Department to audit the project both during and after the execution stages. I also expect the external auditors to audit the project.

5. [Your comments on procurement as a source of graft] maybe true and I appreciate your concerns on this matter. However, there are policies, standards and procedures in place. The project has to conform to those policies, standards and procedures. The Department of Infrastructure has managed significant roads projects before including the , the , and the road around . There have been no major accountability issues with the management of the construction of those roads.

To summarise, the minimum information that Mr Baird was entitled to receive was (i) the value of the property acquired from each proprietor; and (ii) the value of the total compensation paid to or estimated to be due to each proprietor. Even accepting that some of the transactions are not yet complete, and the final figures not known, the vast majority of transactions are complete, yet the figures for these is not given.

This document does not begin to demonstrate that government is prepared to publish and reveal the true amounts paid or due to be paid to all the proprietors. Whatever the alleged policies, standards and procedures alluded to by Mr Franklin are, they are clearly ineffective to permit an audit of the airport project. I would hate to think what waste and worse there has been on other projects managed by the Department of Infrastructure in such a lax way as this one obviously was.

If this is the best government could do, then, in my opinion the document is evidence that our government departments lack the capacity to manage and supervise any major public works project satisfactorily or at all.

God help us all when the additional airport extension is built later this year!