The July “soft opening” has just got even softer. As recently as a week ago, 8 June, the Hon Minister of Finance, Victor Banks, gave a reassuring speech over Radio Anguilla about Viceroy being “well on the way to a soft opening in July". This, he said, will result in the employment of a number of Anguillian workers. Certainly, as of that date the Viceroy management had not informed him that there was likely to be any delay in the previously announced soft opening scheduled for 1 July 2009. 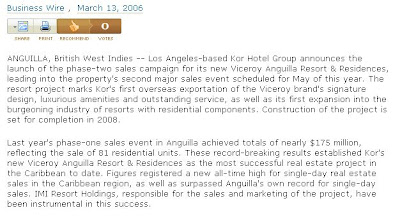 The original opening was supposed to be in 2008

To go back in time a bit, we will all remember that the original soft opening was supposed to have been in December 2008.

Then, they announced that the opening was delayed until 1 April 2009.

Later, that date was quietly changed to 1 June without anyone giving any explanation.

I wonder what the investors in apartments or villas made of these repeated delays and disappointments. The amounts of money they had to commit were huge. Contracts were signed and deposits made on the promise that the project would be completed before December 2008:

I wonder how many deposits National Bank of Anguilla financed? The risk is that some of these purchasers, badly hit by the current recession that began only after they signed the contracts, will not complete their purchases and will not repay the bank loans.

Then, in May of this year, a visit to the Viceroy website indicated that reservations were not being taken for June any longer. They were only accepting reservations starting 1 July.

This delay was a big concern for us in . We all remembered that in December 2008, the House of Assembly had debated and passed the national budget for 2009. At that time, members of the Opposition questioned how government could be anticipating an increase in revenue as they did. The Minister of Finance reassured them with these words:

“He said the increase in revenue of $4 million over the 2008 figure was mainly expected from Stamp Duties resulting from alien landholders’ licenses to be issued to purchasers of real estate when the Viceroy project opens for operation in 2009.”

Now comes the latest disappointment. Viceroy has, as of yesterday, just quietly stopped taking reservations for July. Its website shows that the planned resort now has its reservations commencing in August. 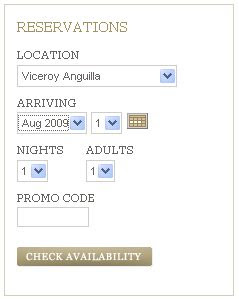 Viceroy online reservations now permits bookings only as of August 2009

Those persons who made reservations for July are being assigned rooms at Cap Juluca and Cuisinart. They have begun to question what is going on:

Yesterday's complaint on Trip Advisor about a cancellation of a reservation

The Hurricane Season has already begun.

I am sorry to be the one to have to tell Victor, but our 2009 Budget has just taken another hit. There will be no revenue from Viceroy for the first half of 2009.

Another clip from the same Trip Adviser page

There is a further concern. How can there be any expectation that Anguillians who were banking on taking up employment with Viceroy in 2009 will hang around to see if the Hotel will really open in August? If I were paranoid, I would ask if it is possible that these last minute changes could be partly designed to ensure there are no Anguillians available for employment when they do really open? Or, is there some more serious systemic problem that we do not know about?

In my humble opinion, we will be lucky to see any revenue at all from Viceroy for the balance of 2009. In my view it is unlikely that there will be any Anguillians employed at Viceroy for the foreseeable future.