A hundred Chinee. I was in

town on Monday to hold the Anguilla Legal Aid Clinic. I saw the parade of Chinese workers outside the Government Secretariat, and wondered what it was all about. On Tuesday I heard the banter between the members of the House of Assembly during the Budget Debate. That provided a little light on the subject. And, now I read about it in the Daily Herald. It turns out that about one hundred Chinese construction workers employed by Ashtrom on the temporarily shut-down Flag Luxury Properties project went to see the Chief Minister. They wanted to “express their concerns and to share their experiences” over the past four or five months. As I understand the language, that is journalese for being extremely upset at not having been paid for the work they have done over the past four or five months. For having their water and electricity cut off for non-payment of utility bills. And, for not being repatriated to their home in as agreed. 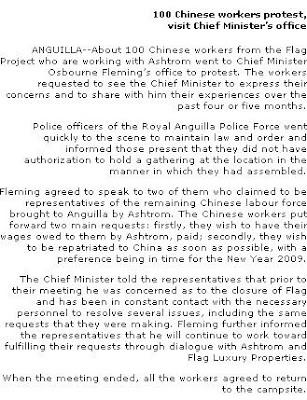 According to the newspaper story, the Chinese workers put forward to the Chief Minister two main requests: One, they wished to have their wages owed to them by Ashtrom paid. Two, they wished to be repatriated to as soon as possible. Their preference was to be home in time for the New Year. The Chief Minister assured them that he was in constant contact with Ashtrom and Flag. He was working to resolve several issues, including the same requests they were making.

The question that springs to mind is Which New Year? If it is the new year according to the Gregorian Calendar, the Chief Minister only has about ten more days to get the Chinese workers home. If the Chinese were talking about the Chinese New Year he has a bit more time. This year 2008 is the Year of the Rat. Next year 2009 is the Year of the Ox. The Chinese New Year begins on 26 January 2009. The festivities go on for fifteen days. Somehow, I do not believe the Chinese workers are very interested in our New Year. The Chinese New Year sounds much more fun. That means the Chief Minister will have a little more time to get Ashtrom to live up to their legal duty of paying and repatriating their abandoned workers. During the Budget Debate he said he expected some seventy of them to be home for Christmas. I don’t believe the Chinese know anything about Christmas. But, I am sure the news of going home would be welcomed by them. He did not mention their unpaid wages. I am assuming they are going home with money in their pocket. They will not be simply picked up by the police and placed on an aeroplane and deported.

Perhaps the most noteworthy event is buried in the second paragraph of the newspaper story. It says that police officers of the Royal Anguilla Police Force went quickly to the scene to maintain law and order. They informed those present that they did not “have authorization to hold a gathering at the location in the manner in which they had assembled”. That was disturbing to me. The action of the police, while legal, was grossly uncaring and offensive. These people were victims, not rioters.

Perhaps the police did it pour encourager les autres. Maybe they had Percy and Quincy in mind?

One is still left to wonder. If the police were to be made to go unpaid for five months, would they take care to have authorization to hold a gathering at the location in the manner in which they had assembled?