In Anguilla We Do Not Name Names. I received the following press release from the government press office on Tuesday. I guess I am on the mailing list as part of ’s “media”. I challenge you to read the release below and guess what it is really all about [excuse the bad spelling, but I did not think it in my place to correct someone else’s press release]. Have a look at the photographs below that accompanied the press release. Clicking on a photograph should enlarge it for better viewing.

The Valley, Anguilla, October, Tuesday, 2nd, 2007 --- The Honourable Chief Minister responded to a call at 7:00am Sunday Morning, September 30th, 2007, made by the West End Concerned Group. Upon his arrival he was alarmed and dismayed to notice that someone had dug a circular hole some 4 feet in depth and 10 ft in diameter and used it for a fire pit right on the beach some 20 feet from the water’s edge.

It was obvious that some form of merrymaking had taken place there on the beach just to the North West of Frangipani the Saturday night before. It was undetermined at the time if the said merrymakers of this function were responsible. The Chief Minister is investigating the matter to determine just who the culprits are. The offenders had not only used the beach inappropriately but displayed blatant disregard for the safety of others. The intention obviously was to provide more lighting or some sort of bond fire effect but what was left in the final analysis was a danger to others that could cause injury. The firewood used obviously was construction material such as lumber with nails and Pallot Boards taken from a construction site in the vicinity. Chief Minister Fleming has called the act disgraceful and an irresponsible use of the beach.

Chief Fleming is urging all persons using the beach to sustain the aesthetics of the beach environment by cleaning up after functions and by ensuring that any and all use of the beaches does not infringe on the rights and privileges of other users. It is quite disturbing to behold sights such as the one witnessed on Sunday Morning at the Middle part of . Mr. Fleming is also encouraging persons to report all such acts to the Environment Department. 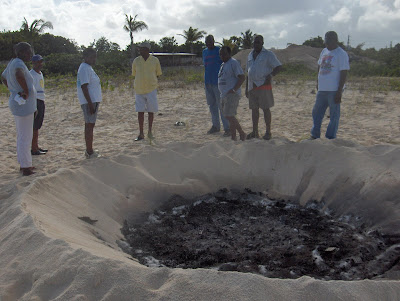 What is so funny about this story is that every schoolchild in West End knows who lit the bonfire on . Every little turtle trying to lay her eggs and getting confused with the light from the bonfire knows who held the party. It happens every last Friday in every month. It has been going on for at least the past four months. That is when the Kor Group holds a beach party at night for their sales and construction staff. The party-goers light a big bonfire on the beach. They eat and drink to their hearts’ content. That is what happened on Friday 28 September. Except that this time my information is they were not sitting around the bonfire drinking with merriment. They were drowning their sorrows. After months of effort, and a huge expenditure on flying prospective purchasers in to , my information is that not one villa or apartment has sold. Viceroy at is not selling. The Tides projects at and are not moving at all. Money is hemorrhaging. Staff are being let go. Carillion, the construction company, has its share of woes. My information is that they are about to leave . Anyone with more accurate information is welcome to add their comment. 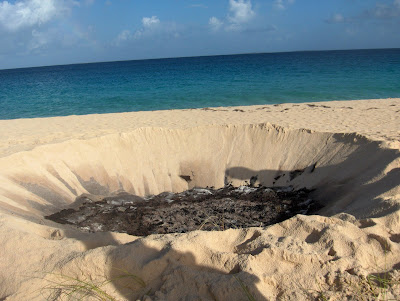 So, will somebody please enlighten the Chief Minister and tell him that the unknown culprit who left the abandoned fire pit on the beach is probably his favourite developer in the West End of Anguilla?

I have just learned from a very reliable source that I misinformed myself and misled you when I wrote above that Viceroy was responsible for the bonfire on the beach. It was nothing to do with Viceroy.

Apparently, Val Davis celebrated the birthday of the charming Ms Lake by holding a beach party on Saturday night. The party involved the subject bonfire. All eyes now turn to Val to see if he will apologise to the Anguillian public for leaving such a mess uncovered on the beach.

Meanwhile, apologies are due from me to Viceroy for the incorrect information. My apologies!